*Zipzip*
The closure of the backpack's compartments crystallized in Nick's consciousnesses as the pleasant feeling of self-contained readiness. The feeling held familiarity after eight months of travel. Only the road awaited. Today's road led to the the harbour and the office of Thailand's Department of Immigration. The last border to be crossed was also the least sure; a gateway into a land where whole regions were forbidden to foreigners. This included the region just past the border, a region that must be crossed before the final destination of Mandalay. The self-contained surety of himself and his affects served as a counterpoint to this ambient uncertainty. 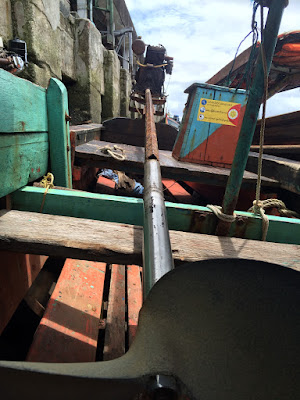 It had been raining steadily for days. But today the gentle thrum of the tin roof ceased and grey cracked slowly to reveal glimmers of a blue reality above. “Ready.” Elizabeth replied to his unspoken question. Both turned to leave the room.

At the road they hailed a songthaew toward the pier. It required a certain preparatory interrogation of helpful locals to obtain information on the correct route number and expected fare, but Nick always preferred this to the effort of haggling down foreigner prices with an ambitious taxi driver. The two travelers settled into the padded seats and smiled at the other two truck-bed wayfarers. The universal greeting of southeast Asia when common language fails.

The encounter at the counter for leaving Thailand was perfunctory. The general and unspoken assumption was that the two travelers were heading across the channel for a visa run and would be back later that day to collect our new 30-day permission to stay in Thailand. Such was the desire of all but a handful of travelers who crossed the border from Ranong. Instead they were to attempt a traversal of the thin southern reaches of Burma along the 800-odd kilometers of the Andaman coast.

Stepping away from immigration Nick and Elizabeth were immediately engaged by a smooth long-tail operator who, despite his ambition, hesitated for only three beats before accepting their 100 baht offer in exchange for international conveyance. 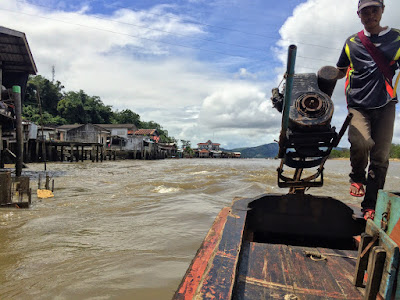 The muddy waters flowed swiftly around the few small islands that lay in the stream. They roiled in patterns known only to the boat operators who plied through on a daily basis. The first glimpse of the verdant shores of Burma swung into view. 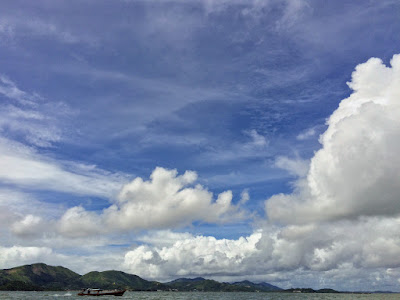 As the splintery craft nosed into the expanse of turbulent currents of the Kraburi river mixing with the Andaman sea the occupants hastily donned an array of life jackets. Though relatively unconcerned, Nick reflected on Elizabeth’s story of how many of the locals did not know how to swim, especially the women. For a moment the prospective terror of such an undertaking stuck him. The idea of a lonely vessel tossed upon a violent and indifferent sea surrounded on all sides by certain death. 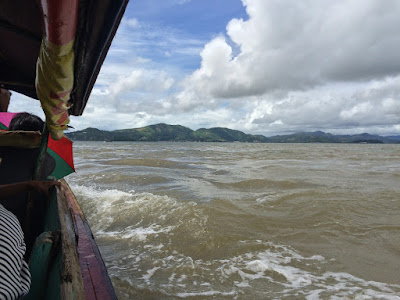 Visas into Burma had already been granted through the shockingly efficient agency in Kuala Lumpur—a process that consumed only two days. The stern gaze of an immigration officer’s scrutiny is half made up of cold and keen incision and half apathy. Either one can lead to trouble. Breath catches, awaiting the verdict: either a condemning question or…

*Whomp, whomp* that double-thump of a stamp upon the inkpad and the passport. 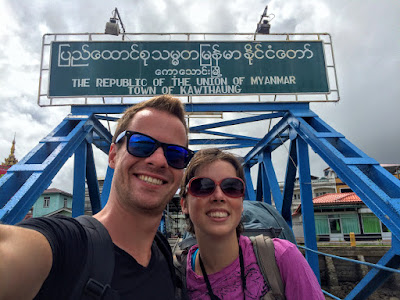 Kawthaung is a city of substantial grit, both figurative and literal. It comprises the southernmost cusp of mainland Burma and dangles between the watery expanse of the Kraburi and the Andaman sea. 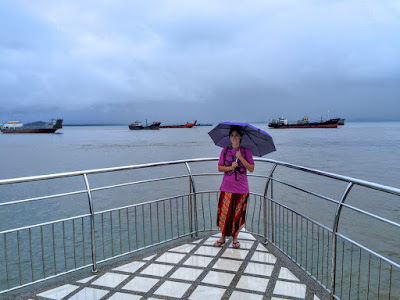 Fishermen’s huts project out from the shore, raised high above the muddy tidal flat on spindle legs of old timber. These pathways of jerry-rigged planks lead into the heart of the lively town with markets and beer bars buzzing and higher up perches the watchful golden monastery of the hilltop. 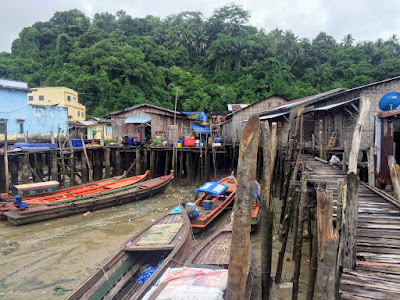 The rainy season lasts for eight months of the year and Nick and Elizabeth were right in the middle of it. They had both spent the preceding days in futile research of whether or not the boats were running up the coast to Myeik. Dead telephone number. No answer. Disconnected. Upon arrival in Kawthaung Nick was finally able to pursue the ephemeral boat in person. “No boat. Because season.” Undaunted, he approached another hotel. “No boat, only fly.” The travel agent: “No boat. Mogh.” Grim-face Nick returned to the hotel, hopes of a 4:30 AM departure dashed. Backtracking to Thailand and having to acquire another visa in Bangkok before approaching the Mae Sot border crossing much further north was not an inviting prospect. 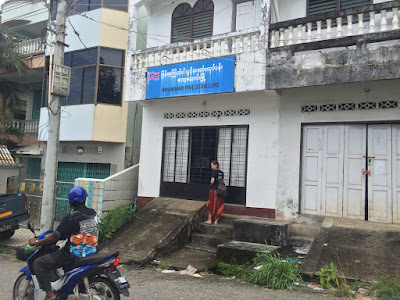 According to all reports, the only hope of proceeding north was by boat. A road did exist, rutted and cratered by the rains, but it was barred from travel by foreigners. There were a few stories of those who had gotten through—passing by checkpoints in the dead of night or when no one was watching. One would have to be extraordinarily lucky to find a bus ticket vendor even willing to sell to a foreigner. This occupied Nick’s ruminations as he attempted to traverse the doors of sleep.

The morning introduced a congenial chorus of summary rejection. Eversmiling. As the hours of searching wore on, hopefulness engendered by the ubiquitous 3-in-1 coffee mix gave way to grim determination. The misting rain fell coating the whole town and dampening the spirit. Kawthaung’s pool of ticket agents was running severely low after the 13th rejection. Nevertheless by mid-afternoon Nick was able to unearth one travel agent seated beside a muddy road who was willing to sell a bus ticket onward to Myeik. Said ticket was purchased quickly, with nonchalance and not too many questions.

“If we get stranded at a checkpoint that would be quite an adventure!” exclaimed Elizabeth over a celebratory Myanmar beer.

“Well we could be stuck thirty kilometers out of town with no way back and fewer ways forward.” This seemed to dim the pioneering sparkle in her eye.

“It’s the best chance we’ll have this month. We’ve got to take it.” Nick continued in a tone more deserving of the toast. 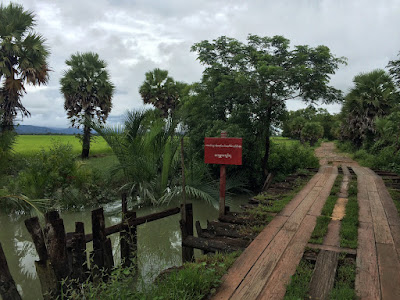 15 hours in a 9-person van filled with 14 other people loomed ahead in the night. Though the road might have been a perfectly respectable dirt track at one point, there was an immense effort to turn it into a paved superhighway that seemed to be underway along the entire length of the route. The effect was that the track was covered in gravel that could more accurately be described as a collection of untarred boulders.  These, mixed with the rains, made matters much worse than any respectable dirt track would have dreamed. 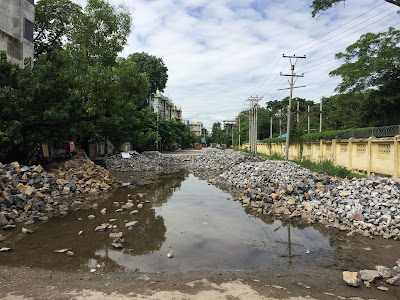 The road was of such a condition that half of the occupants were retching to the gyrations of the van by the second hour. The intrepid driver was not phased in the least by this scene of unmitigated regurgitation and continuously dispensed a stream of small plastic bags from a spool attached to the dashboard.

All things considered it was not terribly conducive to grasping any shuteye whatsoever.

The exhaustion was relentless. The van slowed and Nick flickered into full alertness. Was this the police checkpoint? But no, just another rest stop sparsely populated by listless men at ease and at whiskey...

At long last the dawn broke its golden yolk over the eastward Tenasserim hills. First rays struck the expansive rice fields and caused a slow explosion into verdant green. Then the rain came down over the hills waving curtains of splashing droplets into the paddies. In the distance rose the small urban spectacle of Myeik.

“We’re too close to be turned back now. We broke through!”