Far away in Cambodia the Vietnamese army has just pushed the Khmer Rouge out of Phnom Penh and is engaged in a bloody guerrilla war for what remains of the country’s soul. The Dead Kennedys release Holiday in Cambodia, a sardonic criticism of both faux-compassionate hipsters of the era and corporate yuppy ideology. Frontman Jello Biafra howls into his microphone, entreating superficial and materialistically privileged white Americans to benefit from the perspective of a holiday in a Cambodian labour camp under the cruel whips of Khmer Rouge officers.

It's time to taste what you most fear
Right Guard will not help you here
Brace yourself, my dear!
2015: Children born since the fall of communism have now graduated college and Soviet Union has since been sliced up in an orgy of capitalist profligacy. The specter of Da’esh (Islamic State) and terrorism rises in the middle east while in some corners of America a panic has arisen about Starbucks cups with less writing on them than last year. Christmastime.
Multicolored lights twinkle merrily under the tropical sun amid festive Disney characters outside of the hotels of Siem Reap. Peace has returned to the Kampuchean plains and hills. Though the country remains impoverished across many dimensions from the genocide of the past, the economy is booming, new construction is going up everywhere, and tourism comprises a hefty and rapidly growing proportion of Cambodia's GDP. The chief tourist attractions? The ancient Angkor Wat temple complex in the west and the specter of the Killing Fields and genocide museums in the east, to which the privileged classes of global tourists flock in droves.
It is certain that we have an obligation to learn from mistakes of the past. That it is right to peer from behind the curtains of our cosseted lives with the aim of empathizing with people unlike ourselves. What was it like to live in the Kampuchea of 1980 or 1975 as a former office clerk evacuated from the city and forced to tend fields, or a poor farmer, inspired by a charismatic leader and an uprising turned to fear and complicity with something that has gone horrifically awry.

You can imagine if you try.
We should ask ourselves these questions. But what happens when we stop making the effort, when the Killing Fields become another vacation check-box, maybe slotted in between a session of heavy drinking and a trip to the shooting range. 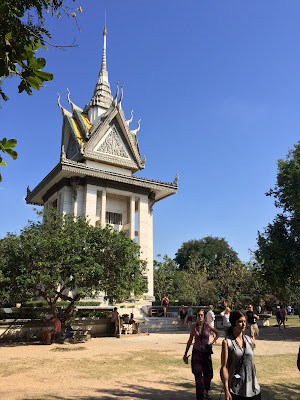 Tourists outside the pagoda at Choeung Ek, which is filled with the skulls of genocide victims
Sometimes an experience demands more from you than you can of it. So maybe just keep that in mind before you book your 50 rounds of AK ammo (Ice Cube doesn't think that's necessary for a Good Day anyway), or snapping that picture of grieving families on the ghats of Varanasi, or clambering over the sacred Dreaming Tracks of Uluru in pursuit of an ‘authentic’ experience.