With the meditation retreat canceled, we had 10 days unexpectedly free to be tourists around the country. With only a 28 day visa, this actually turned out to be a huge blessing. It wasn't until we got to Yangon and started discussing where to go next and what to do that we realized how much we actually wanted to see the country beyond the inside of a meditation center. In just 5 of those 10 days that we'd have been locked up without looking at or speaking with another person, we:
Explored Yangon,
Tried to take a train to Bagan,
Were turned away from the train to Bagan,
Took a train to Inle Lake,
Visited 2 vineyards,
and had decided to come back to Myanmar again.

One might assume that pulling into the Yangon railway station without any plans in the city or knowing where we'd be sleeping that night would be stressful for us, but that person would be more like Elizabeth and Nick 9 months ago than today. In truth, since leaving Australia we can count on one hand the number of days that we entered a city with a reservation for a place to stay.

We found a hostel online and commenced a search for how to fill our 10 new-found days. 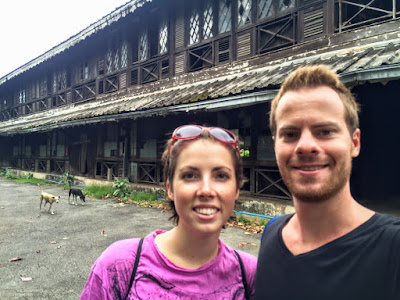 The original Pegu Club, famous gentleman's club from the 1800s and inspiration for the cocktail of the same name. It belongs to the dogs now, also mosquitoes that don't care you've literally just spayed on repellent 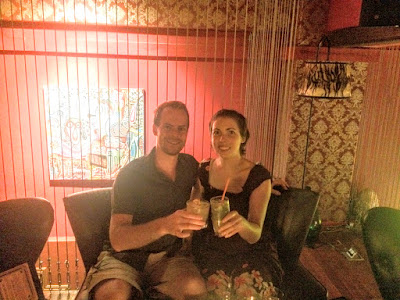 A speakeasy that's not a mass of abandoned buildings: the Blind Tiger. Nick ordered a Pegu Club in homage 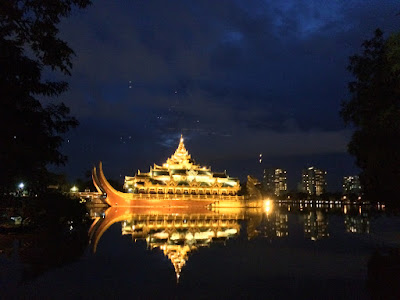 A permanent and very famous fixture in Yangon, cemented to the dock, but traveling through time with its nightly "dinner and a show" performances of traditional dances and shows. 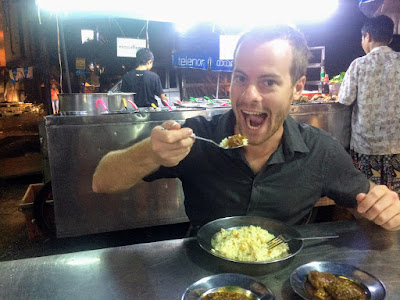 Myanmar is also famous for its street food. Most tourists probably wouldn't opt for the pig brain purchased off the side of a highway, but most tourists are not Nick.
An enjoyable time in Yangon was followed by a desire to see Bagan, land of a thousand temples. Bagan is a famous area in Myanmar, and Nick and I bent ourselves toward it as our next stop. A quick search on seat61.com told us that the daily train would leave mid afternoon, and we showed up at the station to purchase our sleeper seats.

As quick aside, a shoutout to them as the most amazing website for train travel in foreign countries, countries like Indonesia, Myanmar especially. With Indonesia and Myanmar you're lucky to be able to find whether a train route even exists on any in-country websites, and are most likely to find that timetable information online consists of a badly translated version of "go the the station to find out the current timetable." Seat 61 has timetables, prices, and class information on trains in virtually every country.

Crowding around the station window (people in Myanmar don't love queuing) approximately an hour before our train was to leave, we learned through multiple attendant's broken English that the train to Bagan was going to be at least 9 hours late and quite possibly more. They would not sell us a ticket until the approximated 9 hours from now (11pm), when they would have a better idea of exactly how delayed it was likely to be. Relatively certain that this meant we would arrive back at 11 only to be told that the train was canceled or in something equally certain to strand us at a train station late into the night, we quickly changed plans. Bagan could wait, we would make our way up toward Mandalay from the East instead, hitting the popular Inle Lake.

Re-inserting ourselves into the crowd, we were able to successfully purchase sleeper car tickets leaving in just a couple hours. Our first train with a sleeper car! 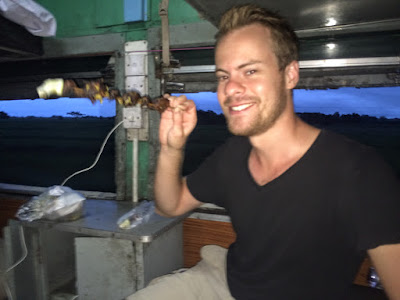 We ordered dinner on the train, Nick chose "Fried Sparrow," those are 4 whole birds. Tiny, but whole. We didn't love the sparrow, but it was fun to try 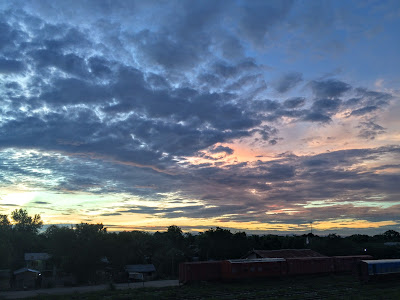 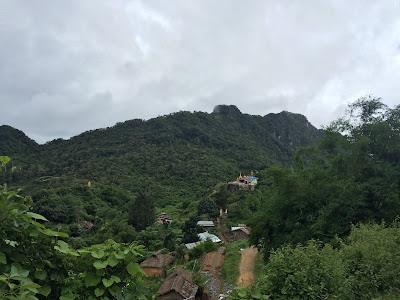 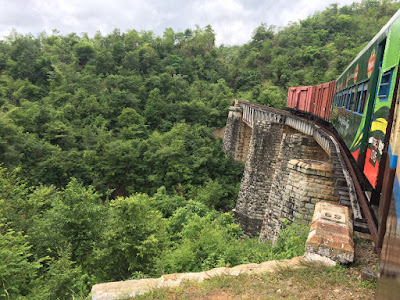 Inle Lake was a lovely area, full of more tourists than we had seen in a while, not since leaving Koh Tao, Thailand a few weeks prior. In the more Southern areas of Myanmar we'd seen basically no foreigners and in Yangon we'd met some, but they were mostly doing business here. Inle Lake, apparently, is where they were all hiding.
We took a boat tour around the lake, which I recommend to everyone who visits the area. It's kind of "the thing" in the area. 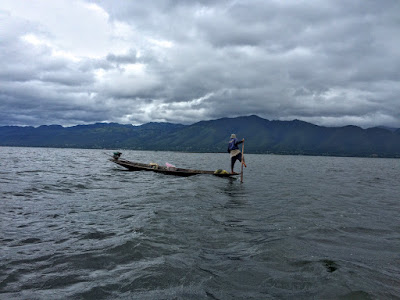 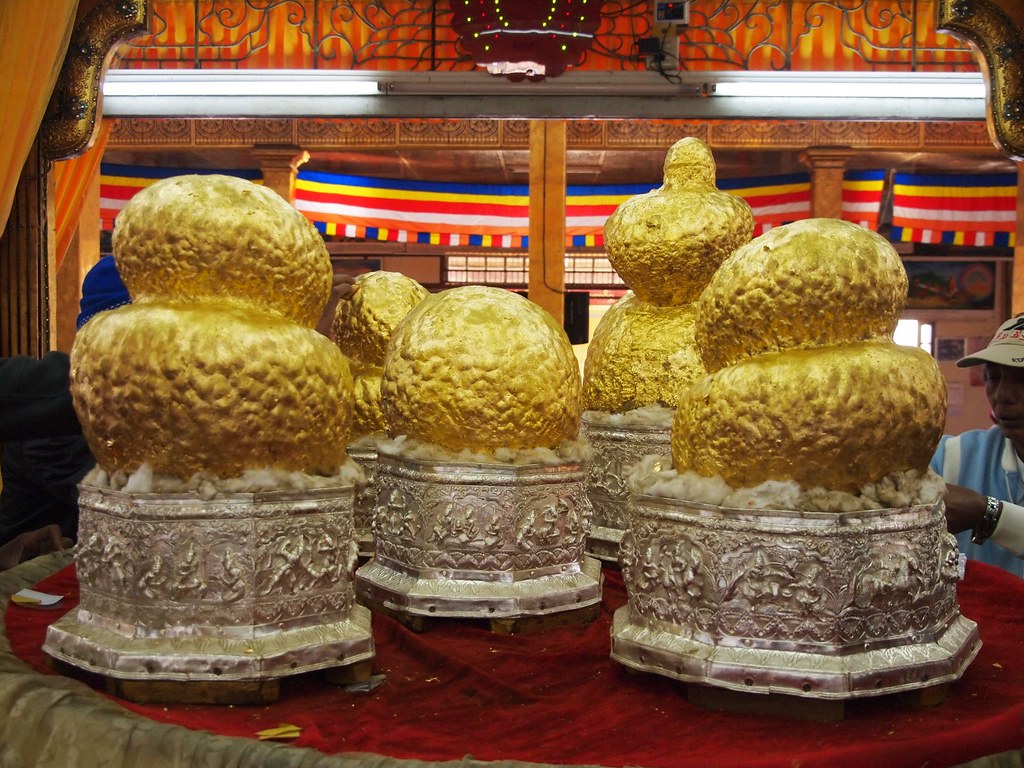 Labeled for reuse by Paul Arps on Flickr: https://www.flickr.com/photos/slapers/11772878303
The 5 Buddha statues at Paung Daw Oo temple on the lake. These statues were originally images of the Buddha, but have been covered in so much gold leaf by male worshipers. Women are not allowed to touch them 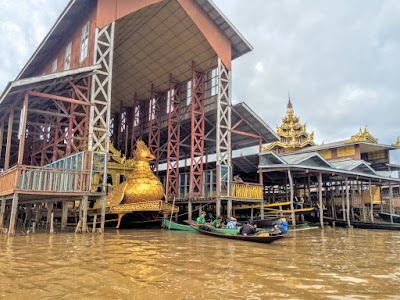 The barge used to annually take 4 of the 5 images around the lake. 1 image always remains within the temple
Additionally on the tour we were taken to see a silver jewelry making shop, a floating market, a knife making shop, a weaving factory, a restaurant, a boat maker, a temple, and a floating garden. All of this was actually on/in the lake. At one point our boat was going through a village where everyone's front porch had steps down into the water. These villagers had small, nearly flat boats with which they would get around. For some reason there was also a motorbike on someone's porch. No idea why or how, as we were no where near land, and the only boats we'd seen around were small canoes. 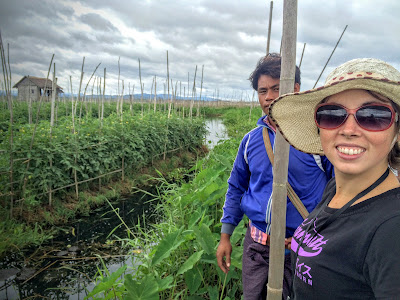 The floating garden, producer of thousands of tomatoes, supplying a large amount of the surrounding area. When we stepped foot onto it, our feet sank down 6 inches into the lakewater. 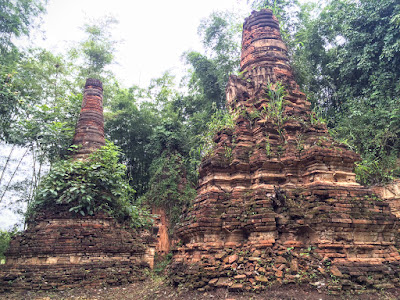 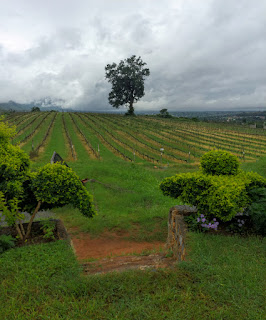 A second vineyard lay 20 km out of town and we decided to stop there on our way out of the lake area and toward our final charity destination...
Stay tuned for our final blog post under the heading of the charity campaign!
Posted by Elizabeth at 7:36 AM