Our visa allottment was ticking away as we entered our last city in Indonesia: Jambi, on the island of Sumatra. Singapore is only accessible via ship from the island of Batam, so upon our arrival on Sunday our first order of business was to confirm the ability to get to Batam on Wednesday, the last day of our visa.

From Jambi we could get picked up at our hotel at 6AM, take a 2-3 hour car drive to the harbor (nobody could agree how long the ride would take), catch a boat at 10AM to Batam (5-6 hours, more consensus on this one), and arrive in plenty of time to catch the last boat to Singapore at 8:30PM. Good. We chose to book through our hotel an inclusive trip car & boat to Batam instead of booking separately because of how important it was to get all the way to Batam that day. We also had spent the last 60 days haggling for practically every form of transportation and many other things, we were willing to pay the hotel markup to have it all taken care of in one fell swoop. We confirmed the price and pickup times twice. 350,000 Rp each, so 700,000 Rp, we would pay the driver on pickup.

All of that taken care of we proceeded to check out Jambi for a few days. 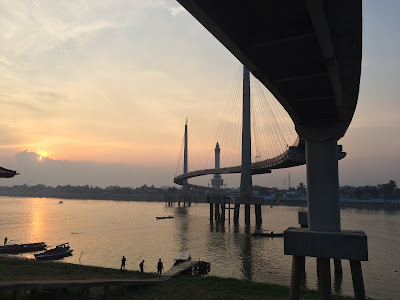 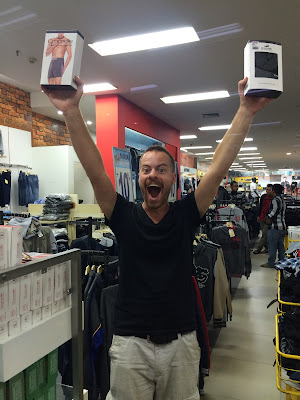 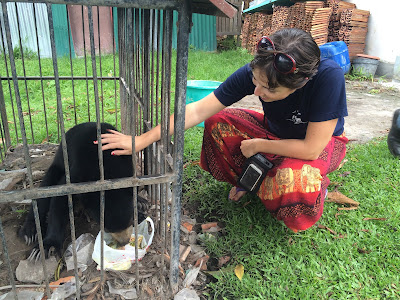 We met a bear rescued from poachers

There isn't much to say about Jambi. We were ready for the next chapter: Singapore.

Wednesday morning at 6AM sharp our driver arrived. After this good omen things went downhill fast. Despite our prompt and early pick-up, the driver began just (apparently) aimlessly driving around the city chatting on his cell phone and asking us if we wanted to stop for coffee. We declined, saying we needed to get going to Batam. An hour later, still in Jambi, we showed up at the ticketing office to pay. The price was 60,000 Rp each, car only. The boat was neither included, nor did the ticketing office know how much it would cost. We argued for a couple minutes, but this company clearly didn't have service to Batam, only to the harbor, so we gave up and clambered back into the car with the other passengers we'd picked up here. It was now 7:05 AM as we pulled out. We still had no clear answer about how long the drive would take, but given that we were now on our own to get the ferry ticket, we crossed our fingers for closer to 2 hours than 3.

The driver was a maniac, bombing down highways and smaller roads alike. I defy anyone to have gotten to that harbor faster. It took exactly 3 hours. The math whizzes among you will be perking up about now.

"If the boat leaves at 10AM, they left at 7:05AM, and the trip took 3 hours, that leaves our protagonists with how much time to buy their tickets and board?"

If you said "negative 5 minutes," you take the cake.

As soon as the car stopped, I scrambled out of it and began hurredly putting on my pack. A gentleman with a ticket book told me to slow down and not worry, but I just squeaked "10 O'clock" and continued to hurry. He asked our names and we asked the price. 470,000 Rp. Each. Cue the math whizzes again:

It is worth mentioning at this point that this was the last purchase we intended to make in Indonesia, and our last ATM withdrawl had been made accordingly. Including a small stash to buy a coffee or snack on the ferry, we only had 600,000 Rp left, and some small change. And here is a man telling us that to get on the ferry (which theoretically left 5 minutes ago) we need 940,000.

We ran. Backpacks not even fastened around our waists, we ran onto the dock to get past the buildings and see if the ferry was even still here. It was not. A frothy wake leading away from the dock led our eyes to a speedboat zooming away from us toward Batam. Another man, not the one we had fled, saw our distress and told us not to worry. He made a quick cellphone call and the boat turned around.

At this point we get to the end of the dock where we will load and he holds out his hand for our tickets.

"We don't have tickets yet."

He looks only very slightly miffed, but we have some time before the boat's back, so he pulls out a ticket book. "940,000 Rp."

Our last hope, that the original price had been some tout taking a commission and overcharging accordingly, was dead. The actual price of the boat really was 470,000 each. "No, the price should be 300,000 each."

He laughed in our faces.

At this point we were pulling out our money, our last ditch negotiation tactic, the good 'ol, "this is literally all we have" trick.

Now he looks significantly more miffed. I can't ever know exactly what the next thing he said was, but a couple words, context, and tone lead me to believe it was something along the line of: "We called the boat to turn around for you and you don't even have a ticket or enough money to buy one?!"

He pauses, the boat is very close now. "Give me that." He takes the 600,000 from Nick. He ignores my 20,000. The ropes are being thrown to the dock and the boat is close enough to board now. A young woman holding tickets holds out her hand for ours. The gentleman steps forward waving our cash. I catch "600,000" and pipe in "and 20,000." The man laughs and mockingly repeats "and 20,000." It's goodnatured mocking, I think he's moved on from miffed to extremely amused at the incompetence of these tourists.

The woman hesitates, rolls her eyes, then takes the money. Nick and I step on board. 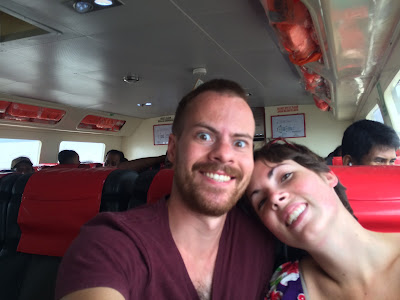 Aboard the ferry: relief and juuust a bit of crazy

We made it to Batam at 5:30, got on a 6:30 ferry to Singapore, and breathed many sighs of relief and disbelief at our day.
Posted by Elizabeth at 11:03 AM