The Lembata to Sumatra Lambada pt. 4

With our arrival in Lombok, we had well and truly reentered the sphere of tourism.

Kuta, Lombok: Full of tourists, restaurants, kite-surfing, and a billion little kids trying to hard sell you bracelets like they just got a pep talk from Alec Baldwin in Glengarry Glen Ross


Little kids would come up to me proffering bracelets and I would invariably decline, but some of them would try tactics like "you said you'd buy one later, now it's later!" (I did not tell you I'd buy one later, tiny child, and no, I will not give you some of my US dollars because you have a collection of foreign money) Grown women were also wandering around, they would be trying to sell sarongs. Every woman, with a pile of sarongs of similar (if not identical, I'm not sure, it's dangerous to look too long if you don't want to be followed home by someone saying "good price, local price") patterns to each other. Every child with bracelets and every woman with sarongs. I wondered the whole time why nobody thought to strike out and try selling something other than what literally 50 other people on the same stretch of beach were trying to sell.

There were storefronts too, and at one point I was browsing through some bags: our daypack had developed a small hole. The store owner's ears were perked at my interest in the bags, and she began telling me of all their myriad uses and benefits, trying to get me to pick this pattern or that one. I told her that I needed to wait for my boyfriend to pick which one we wanted. She poked her head out of the shop and looked right and left, as if she was going to spot him and drag him inside to make him buy me a bag. "Where is he?" "He's getting a haircut, we'll come back later." As I was bringing him back to the bag store a few hours later the woman saw me 3 stores away, saw I had (presumably) my boyfriend with me, and was calling to me that it was time to come in and pick the bag. We did, and it's been serving us well since, but I am still surprised that she recognized me and remembered my reason for not wanting to buy earlier. We had entered a town with so many tourists that I felt like we weren't recognizable purely from being the only white people in town as was the way in many towns prior, but I guess even so, if you tell someone you'll buy from them later, they remember you. Makes me glad I never used that as a method of getting out of buying a bracelet from a kid.

Apart from our new-found identities as walking bags of US dollars, Lombok was quite relaxing and included some interesting discoveries in caves. 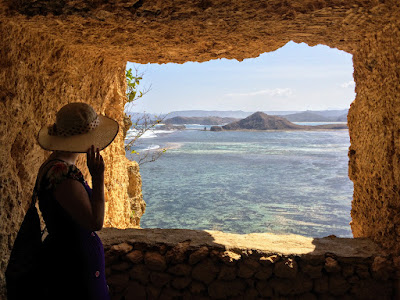 Next it was a ferry ride over to Bali, jumping across the Wallace Line. This ecological line separates the fauna of Australasia from that of Sundaland and the rest of Southeast Asia. Lombok was the last of the islands of the Indonesian archipelago that remained separate from the Sunda mainland during the height of the last ice age, thus deterring the migration of various animal species across the watery expanse and into Australasia. 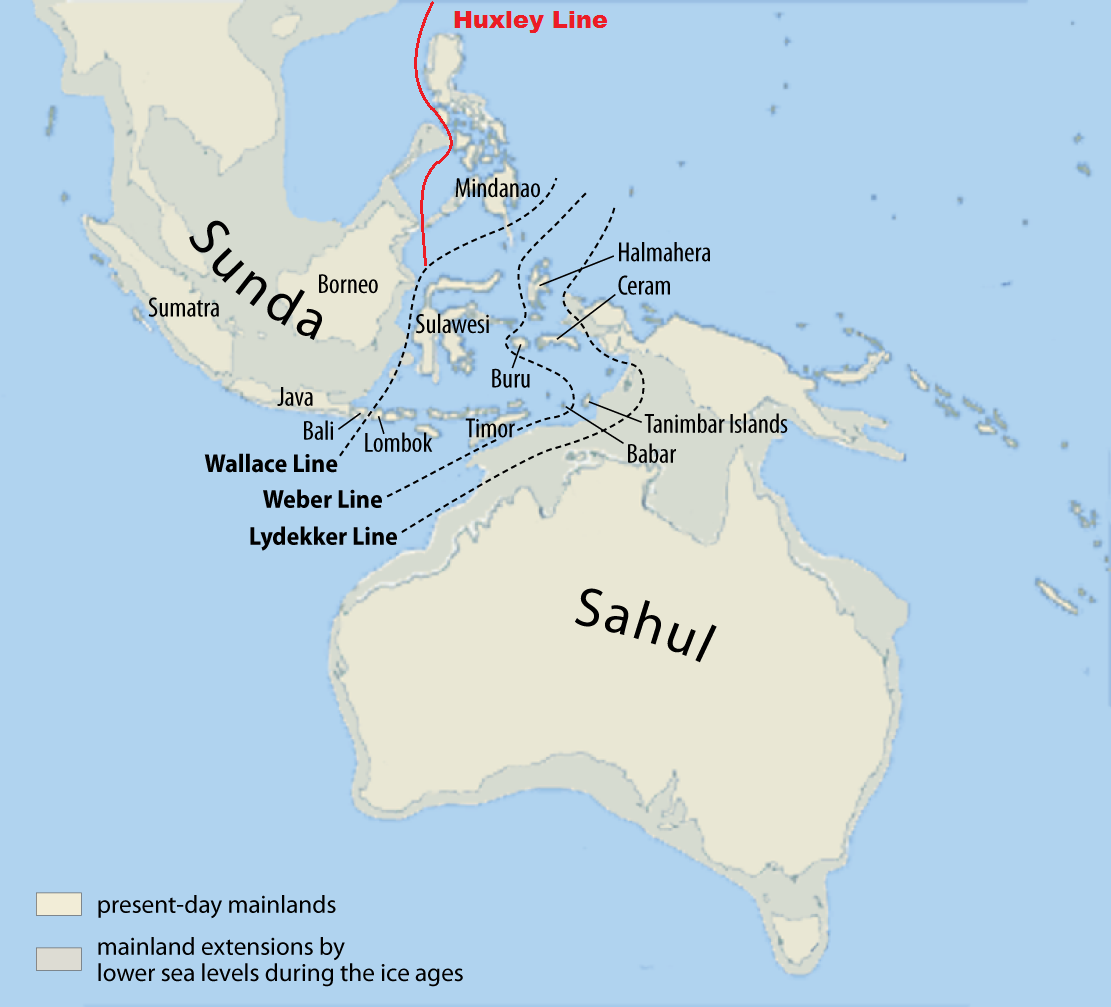 Wallace and some other dudes figured all of this out

Bali, the queen of Indonesian resort islands. It turned out to be a good time to be there between the Hindu Galungan and Kulungan festivals. Children paraded dressed as dragons and banging gongs, kites filled the skies, and the streets were decorated with some kinda beautiful bendy things. 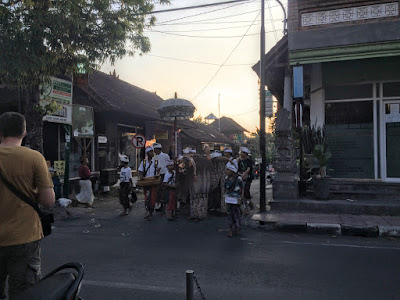 
And I don't know if the holidays were leading to more burning of incense than usual, but the whole town smelled amazing. 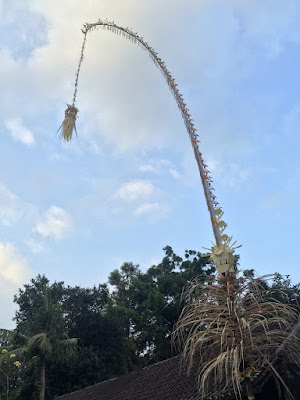 Notwithstanding, we had taken the ferry to the wrong town on Bali. No matter, we made a slight change of course and ended the day in Ubud.

"I see land!" "Hm, we seem to be going into harbor, but not at the harbor we thought we were going to." "Maybe we will go on to our harbor after we stop at this one?" "It certainly seems like everyone is getting off here." "Ah, here come the police to herd us off the boat." "We should probably just go to Ubud and skip Kuta." 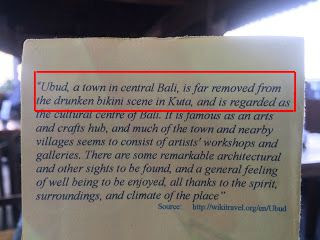 Found on a brochure in Ubud, I think the ferry mistake was for the best. 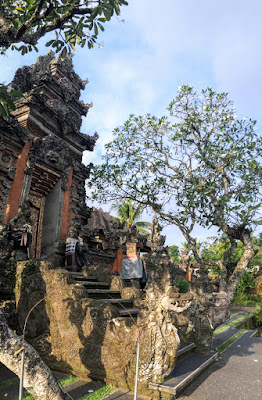 Temples hidden behind the Starbucks! 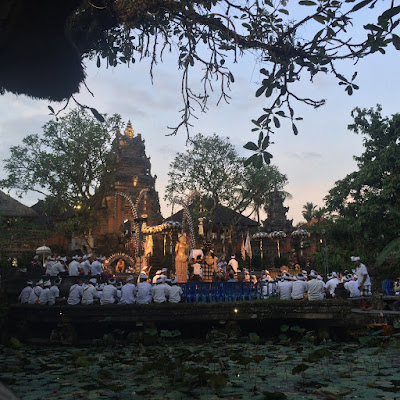 Ceremonies behind the Starbucks!

I was slightly apprehensive about going to the Monkey Forest. The day before we'd been waiting in a health clinic to get Nick looked at for the cough he's got, and 3 separate people came in with monkey bites while we were waiting! But one couple, after washing the bite and waiting for the doctor, told us, "no, no, you have to go to the monkey forest!" So I figured if the bite didn't make them warn people off, it was probably pretty cool. It was. 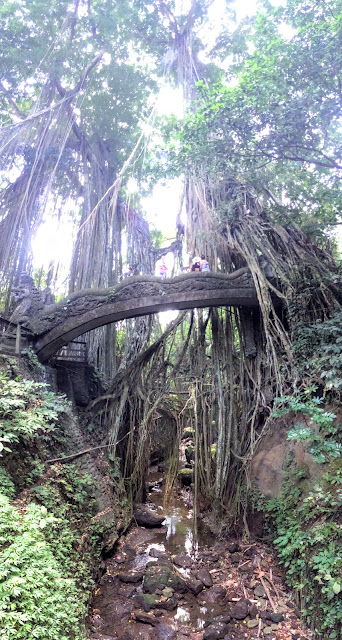 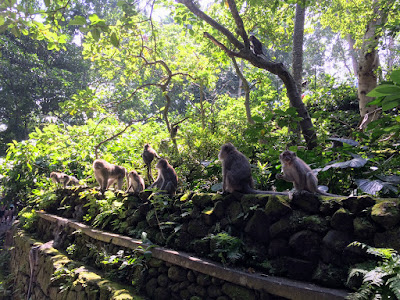 There was a monkey rumble in the Monkey Forest; these guys made sure the offender stayed out

I covered some of the interesting cultural experiences of Bali and the proceeding city of Yogyakarta (Jogja), Java in a previous post. We ended up in East Java right at the end of post-Ramadan holidays trying to get back to Jakarta. The trains were booked solid for a week and so were most buses. Eventually we were able to overpay for a second grueling 18-hour bus ride, this time with no leg room for anyone over 5'3" or that handy little device called a 'toilet'. 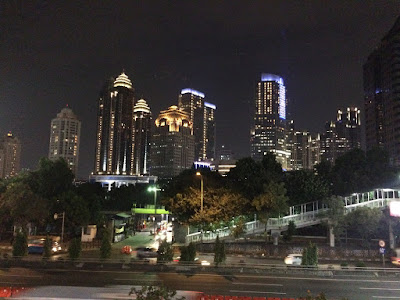 Welcome to the world of luxury shopping

Jakarta is a glistening metropolis of some 11,374,022 or so people. The luxury shopping malls seemed to sell only exceedingly top brand names and the contrast to the rest of our experiences in Indonesia was striking. There was no middle ground, you could either hang out in the palaces of conspicuous consumption pictured about or delve into the lower-cost local markets: 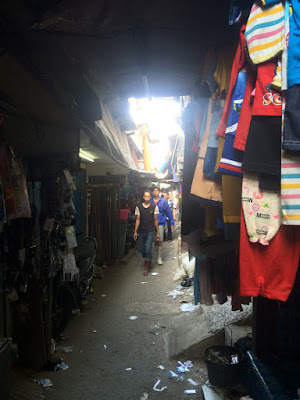 I got a much better deal on new socks here, plus I get double the brands: one sock says Gucci and the other says Louis Vuitton!

The streets were filled with shiny, new cars and double-decker buses. They almost wouldn't let us on the tourist bus because there was 'no standing allowed' an no seats free. How absurd! Mixed in the stream of glistening metallic fish would be a couple of old buses that stood out like Melville simile in an otherwise ordinary sentence. They looked like they were about to fall apart--actually they were literally in the process of falling apart--but they would take you around town for 4,000 rupiah and you wouldn't have to haggle!


Jakarta had some other interesting sights too: 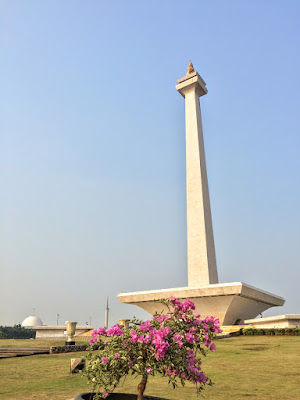 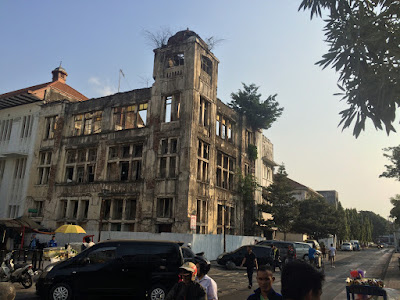 The old Dutch part of town has fallen into disrepair 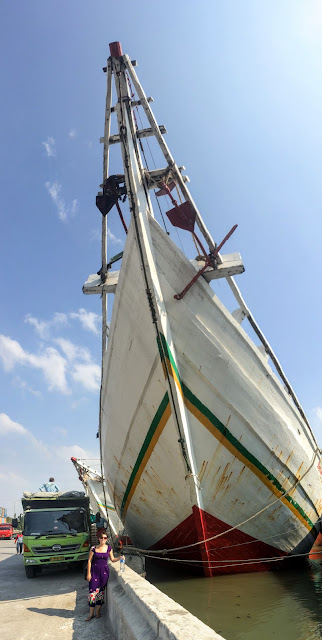 The old harbor had massive boats coming right up to the roadway! 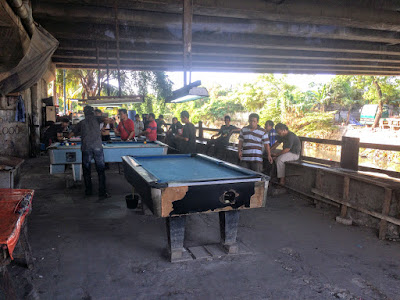 Under bridge pool hall will take care of any of your entertainment needs!
Posted by Nick McBride at 6:00 AM