Nick and I arrived in Timor-Leste just as the current cycle of the World Education project here was officially concluding, but were lucky enough to witness dozens of women receive their program completion certificates. These women have been recipients of loans by Moris Rasik, a microfinance organization based in Timor-Leste and World Education partnered with them to provide financial education. This program started in this area in November 2013 and through it World Education helped women use their loan money wisely, plan in such a way as to pay it back as it’s due, weekly, and give these women financial literacy.
564 women got the foundational education--reading and writing numbers and basic calculation--as well as saving and household cash management.
495 women got education on taking a loan and business. 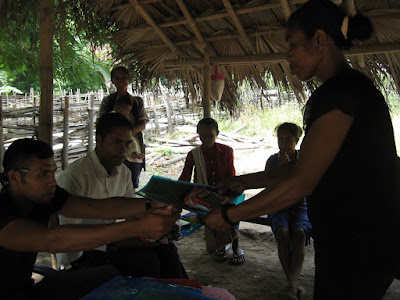 Augustina receiving her program completing certifitate from her facilitator, who was acting as our translator.

Interviewing these women and seeing the results of this project represents to me a quintessential example of what this trip is about for Nick and myself. We were able to visit 3 of the 36 centers that were involved in this cycle of the project. The impact of these meetings is ongoing and emotional. How often do you whip out your cell phone’s calculator and do some random bit of quick math? I may be above average with my math doodlings, but personally I use mine almost every day.. Before this program, many of these women did not know how to read and write numbers. Women with businesses, families, microfinance loans, and weekly loan repayments could not use a calculator.

Although the majority didn’t, two of the women I interviewed had previously had secondary school education and did already know how to read and write numbers. They both stressed to me that the program taught them management of money. Before this, both had loans, but neither had an understanding of separating the loan and incoming revenue into ongoing business costs/loan repayment/home costs/savings.

Fernanda has a loan for her business selling fuel. She has a baby and has had a microfinance loan before this. She already knew how to write numbers because she has had education to the secondary school level. After this program she feels much more confident in her ability to manage her own money and know how to use the loan. Her profits before the program were $8-9 a day and are now at about $20 a day. Sometimes she would run out of fuel to sell and no more would be immediately available. Now she understands how much she needs to buy when it is available so she no longer runs out before being able to get more. She also says that her management of money has improved so much that she is able to set aside and save, she plans to open up a kiosk to sell other things in addition to her fuel.

The rest of the women, who learned just in this program how to read and write numbers, each spoke highly of their new ability to calculate their own finances. When asked, they would speak of the things they were using their loan money for, but more readily they would volunteer their pleasure at being able to understand money now.

Marta runs a motorbike shop. She has 7 children and was making $5 a day before this program. She has never attended school before, and knowing how to read and write numbers has helped her to keep track of her own money. She can now manage her own accounts with understanding, enabling her to make better decisions with money and understand where her costs and profits are. She is now making $10-15 a day and her home life has improved not only from increased profits but because she is applying the same lessons to home management and the money she brings home is being used more efficiently. She is setting aside money for savings as well and hopes to expand to selling fuel for motorbikes soon. 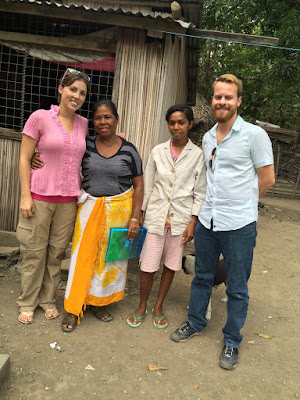 Myself, Marta, Fernanda, and Nick after our interviews and getting their certificates.

Julietta has a kiosk where she sells rice and other goods. She has never had any education before, and did not know her numbers. She has 6 children and was previously making approximately $5 a day at her kiosk. Being able to read and write numbers has helped her be able to understand her own expenses, she is now up to making $10 a day and the money management education has helped her understand how to use this money. She is using her loan primarily to buy a hand tractor to grow her own rice for selling in the kiosk, but she has also used part of the money to improve the kiosk itself. She expects her profits to increase even more now that she is growing her own rice to sell. 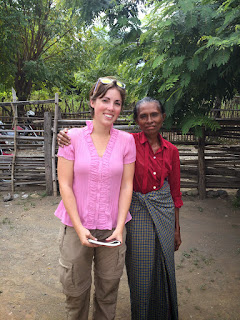 Julietta and myself after our interview.

In each center there was such a sense of community and pride at their completion. Each center we visited was in a different location and had a different facilitator, but the atmosphere was the same. As each woman’s name was called, she would step forward to receive her certificate and a brand new calculator. What may seem merely a cute addition to the certificate is actually a massive step for these women: symbolic and functional. The community represented within each of these centers was clearly very close-knit and caring. Occasionally, a woman whose name was called would not be present and 8 or 9 voices would all ring out with where she was and why she needed to be away. One woman was not present and our translator turned to me and said, “she cannot be here today because she has a baby.” Looking around at the multitude of children around us, some of whom were breastfeeding at that very moment, I was a little surprised that this would keep someone away, but then he continued, “yesterday.” Her certificate was given to one of the many women there who declared that they would be able to take it to her later that day. 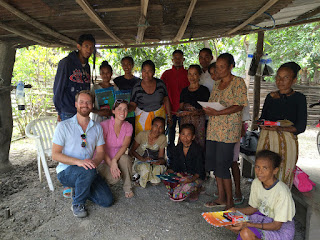 The women of the Nubadok center after receiving their calculators and certificates.

World Education builds on this sense of community, providing training and employing local people to be the facilitators as opposed to bringing in outside facilitators. In the last two centers that we visited, the women did not have a meeting place to go for their training, so World Education coordinated the building of a meeting center. Moris Rasik provided matching funds to help the community build the structure. This philosophy of relying on the existing community instead of importing everything from abroad is what first spoke to me about World Education and their choice of partners. Sitting under the canopy of their meeting house, I felt like I had truly found a special organization, and I can’t wait to see more of their work in the countries we’re headed into. 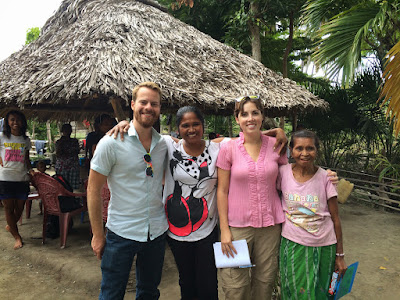 Two of the women in the program in front of the meeting house after getting their certificates.
Left to right: Nick, Edalina, myself, Madalina.

This week, 36 centers with 564 women graduated this program with basic numeracy training and with a newfound understanding of how to run their businesses. They will continue to reap the benefits of the knowledge they now have, improving their businesses and home lives. Another program cycle will start up again in a new district next month, and I am so pleased to know that even more women will be benefiting from this vital understanding of their own businesses.

These women were so outspokenly happy to have Nick and me there to witness their day, but I don’t think I was able to adequately communicate how touched I was to be able to be there with them. For Nick and me this journey is about truly seeing other countries and cultures. The beauty that awaits in areas we’ve never seen before draws us, but so do the situations in the world that exist beyond our comprehension, the plights and the wonderful work being done to combat humans in unfortunate circumstances. This project, these wives, mothers, businesswomen represent a demographic that are difficult to fathom when as far removed as many of us are. People in situations like this may exist outside of our everyday thought or understanding, but World Education is helping.