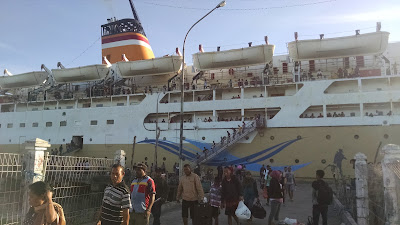 We arrived at the ferry building amid a crowd of people disembarking, an auspicious sign given the myriad stories of ferries being hours (or days) late. We successfully boarded not too much later amid a mass of people acting much less like a queue and much more like grains of sand in an hourglass. Our tickets declared that we were in Economy Class, Deck 5, Cabins 063-A and 064-A. With little hope that “cabin” was anything more than “bunk bed,” we made our way up to Deck 5. 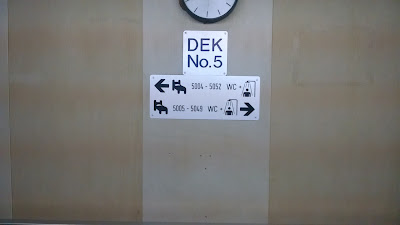 ...Back to the drawing board…

With our cabins apparently non-existent, we found someone in a uniform and pressed our tickets questioningly into his hands. We were directed down to Deck 4, an entire deck of bunks swarming with passengers, and not a single bed in sight unoccupied. 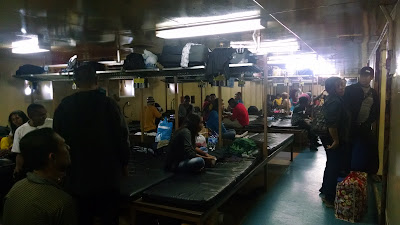 I looked around futilely for numbers (063-A and 064-A??) but didn’t expect that they were anything but first-come first-serve. Our sojourn to the deck actually listed on our ticket may just have cost us beds. Did I mention that the ferry left at 11 PM and arrived at 7 AM?

A blank space caught Nick’s eye, and although it was only a one person space aaaand didn’t have a sleeping mat, we clambered on to stake our claim. Deck 5 had looked too good to be true as soon as we stepped onto it, a quiet, private looking floor above the open clamor that was the deck below. The “Economy Class” portion of our ticket somehow seemed way more important that the suddenly suspect deck and cabins listed. But the weirdest thing is that we had tried to upgrade when we bought our tickets and were told that only Economy existed for this particular crossing. But here we were, both sitting on a one person, unpadded board, thinking longingly of a whole floor of private cabins above us, wondering if we could give anyone our money to let us sleep there.

Side note: I know that this POV may spit in the face of Nick’s recent “disinhibition” post where he outlines how we’ve been getting more comfortable in traditionally uncomfortable situations, but sleep is something I have not yet learned to be easygoing about. I have not (yet) gotten to the point where I can cheerfully greet the THOUSANDS OF CROWING ROOSTERS before 6 in the morning, or understand the busses that roll through towns at 3 AM, idling in the center of town for 30 minutes with music blaring. I have not (yet) learned to greet the day before sunrise or shrug off a night of poor, heavily interrupted sleep. I’ve been showering with a bucket, happily sweating through my clothes daily, gotten bit my mosquitoes and successfully ignored the itching, eaten everything put down in front of me with gusto. I’ve been very disinhibited and I feel quite free, but I’m not (yet) to the level where I can look with a clear head at a 2.5’ x 5.5’ area of board and think “yes, Nick, myself, and our 2 bags will spend a lovely night here.” Sleep is my final frontier.

All was not lost: as I guarded our spot and Nick went in search of an upgrade to a cabin, two girls took pity on us and showed him an area we hadn’t seen that still had some beds (with padding!) available. He came back to tell me and we grabbed our things and rushed to the area where we gratefully spread into the two spots. 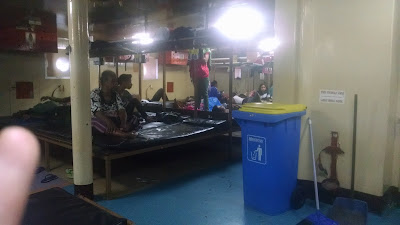 The area was shockingly under-crowded, and we’re pretty sure part of that is because it was someone’s “territory.”

We’ve been calling it “The Pelni Mob.” (Pelni is the ubiquitous Indonesian ferry company, we’ll probably be using them a lot). Upon sitting down, the man next to Nick began chatting with him. I, slightly overwhelmed with the experience so far, withdrew into my notebook to document it with accuracy. A few minutes later Nick leaned unobtrusively over and informed me in a low voice that the guy wanted 50,000 rupiah (~$3.75) for us to use the beds. The whole ticket was only 150,000! Some quick whispering back and forth (I really didn’t want to move away from the beds, but we also didn’t want to negotiate with extortionists) and Nick disappeared once more in search of an upgrade. If we’re going to pay to have beds, 50,000 might actually get us a cabin.

“Alone” with the mobster, I made myself busy with my notebook again. He and his mobster partner kept going around moving things on mats, moving the mats themselves leaving 2-3 slots in a row without padding, but not even attempting to talk to me or get me to give them the money that Nick had left without paying. He returned unsuccessful, still being told that private cabins did not exist on this crossing. The mobster tried again to get the money, so Nick and I discussed if we should pay or not.

Cons of paying:
out $3.75
feel silly for paying an extortionist for something we already paid
for a ticket for
what are they going to do if we don’t pay? Throw us bodily off the beds?

Pros:
get to stay in the beds unharrassed
maybe it’s not a good idea to piss of the Pelni Mob
seriously, what are they going to do to us if we don’t pay?

We decided we would pay, but he had walked away while we were still discussing. He did not ask again. We’re pretty sure that Nick’s carefully cultivated air of not understanding got him to give up on us. Our selves and our bags (laying between us on the beds) remained unperterbed and I was able to sleep.