I have decided that the wedding we attended deserves it's own post, so we'll be stretching Brisbane -> Adelaide into 5 parts :)

From Sydney to Melbourne we elected to take the train. The ride was about 11 hours, and we chose to do the evening train to double up on the cost by saving another night's lodging. It was not a comfortable ride, but no less comfortable than sleeping in a reclined seat in a car, which we'd just done twice.

We had a few hours in Melbourne before we took the train (just a couple hours this time) to Bendigo in preparation for the WEDDING! We wandered a bit, and saw some cool things that we made note of to check out when we got back to Melbourne in a few days.

Walking from the train station to our backpackers in Bendigo was the coldest we'd been since leaving Utah, but we know that we'll only have to deal with cold for about 2 weeks, because soon we'll be in Darwin, Australia and then Southeast Asia. I told Nick that we should relish the feeling of being able to be cold because it's not going to be an option for months as soon as we leave Adelaide.

We woke up the next morning and put on our nice wedding clothes, and feeling slightly incongruous with our backpacks on. The yard behind the wedding venue (the groom's parents' home) was set aside for campers. Jacqui and Troy had (in addition to everything they needed to do for their wedding!) offered us a tent and sleeping bags, even set it up for us before we arrived. Their generosity was so above and beyond, and we were so grateful to be able to camp there after all the fun.

I met Troy when we arrived, but when Jacqui came walking down the aisle in all her bridal beauty, it was the first time I had ever even seen her outside of video chatting. 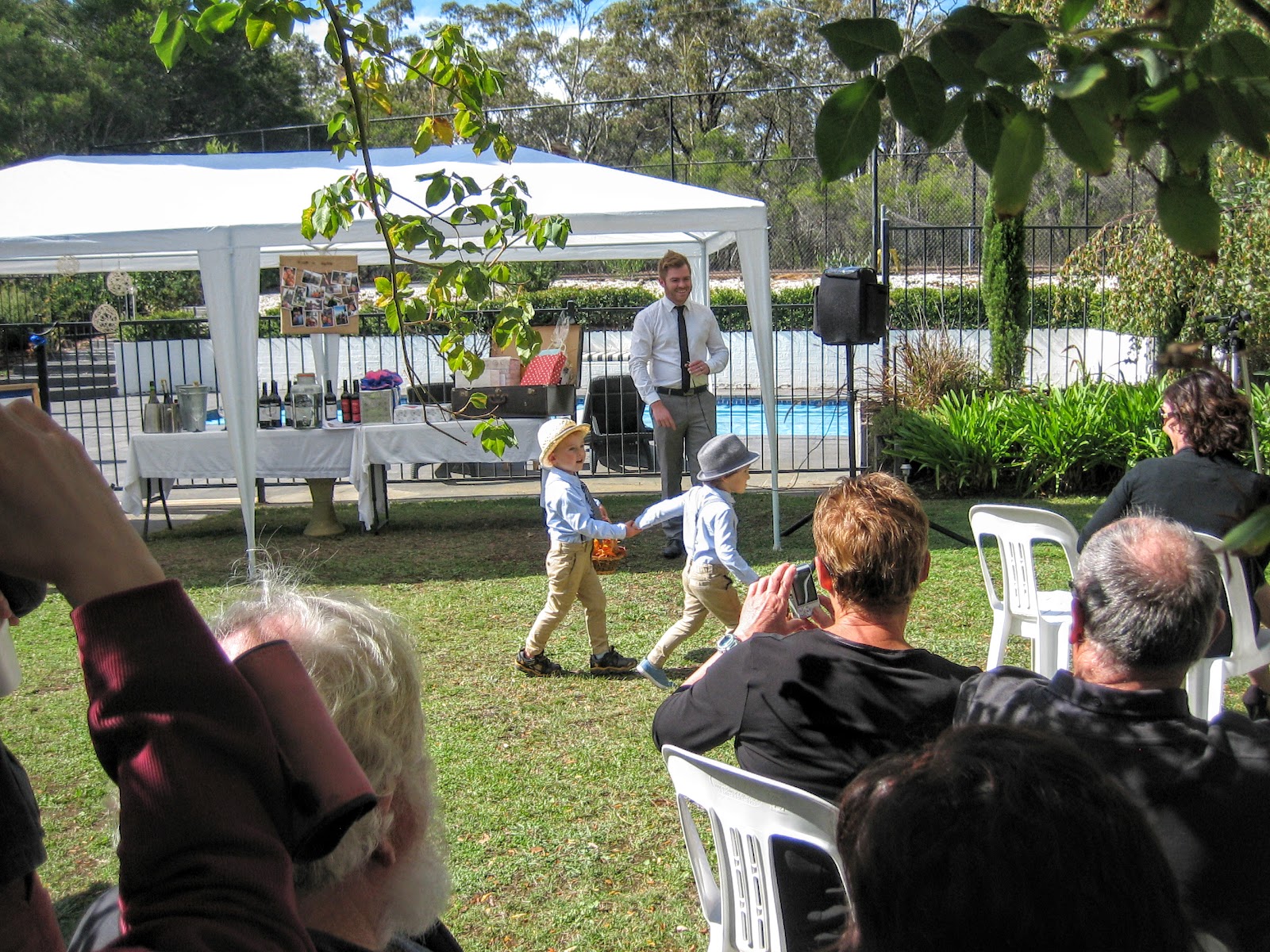 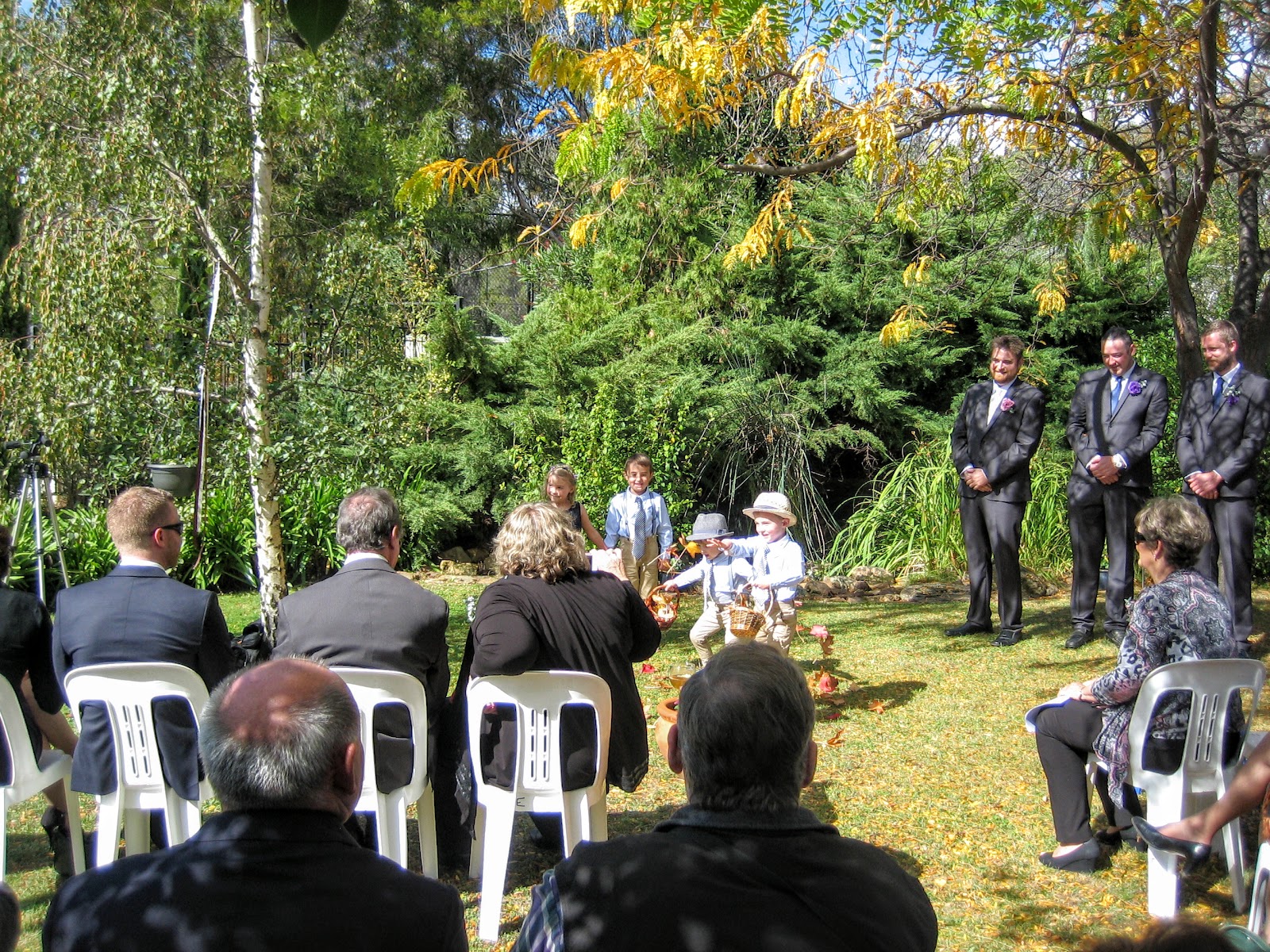 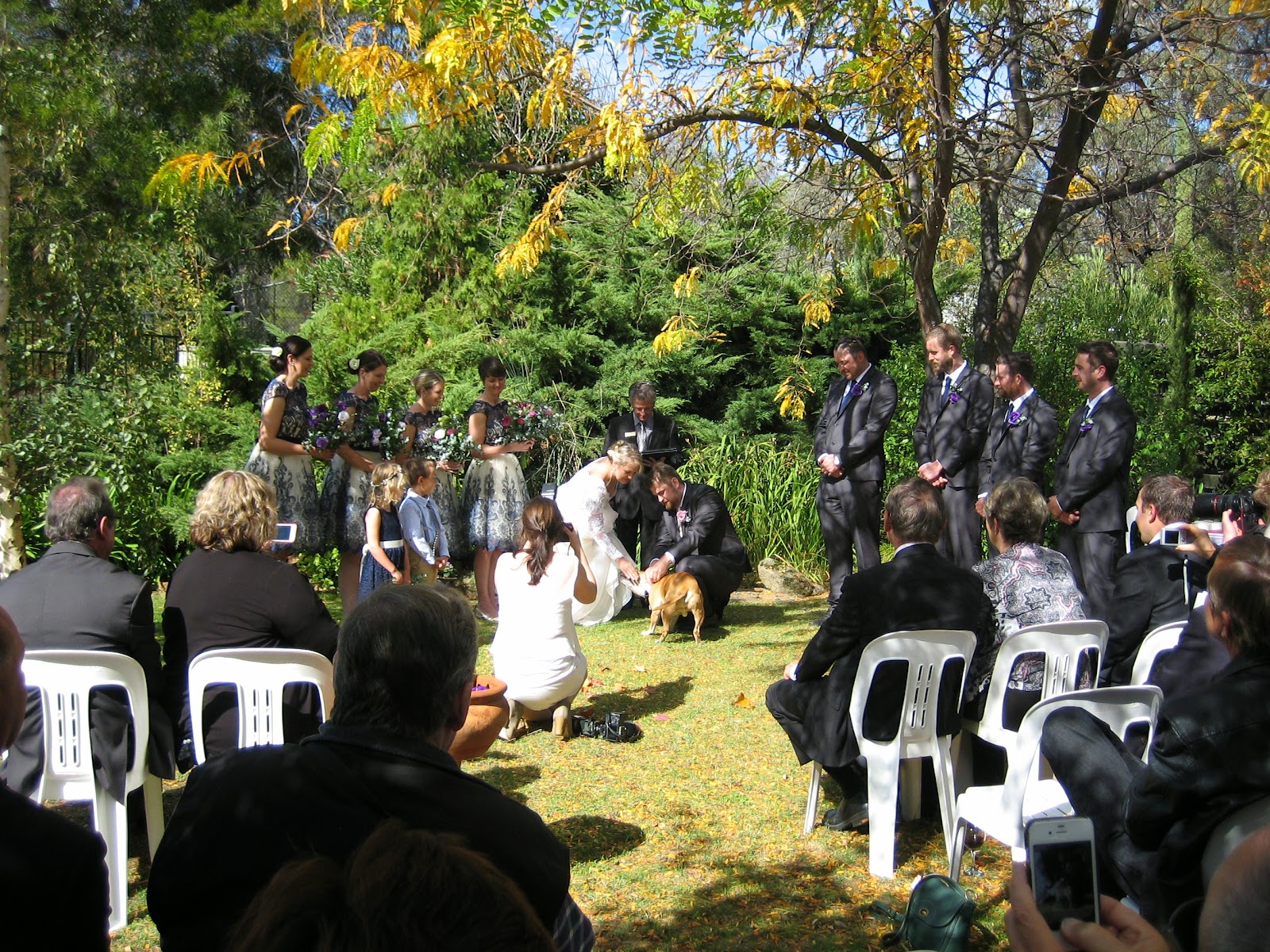 The ring bearer was the couple's adorable dog who performed his duty admirably.

It was such a beautiful wedding and I feel so blessed to have been able to be there and celebrate with them. I met Jacqui briefly at the reception after, and she even mentioned our charity drive in her bride speech. I was blown away by everything about this couple and hoped even more fervently that the gift we had gotten them would please them. 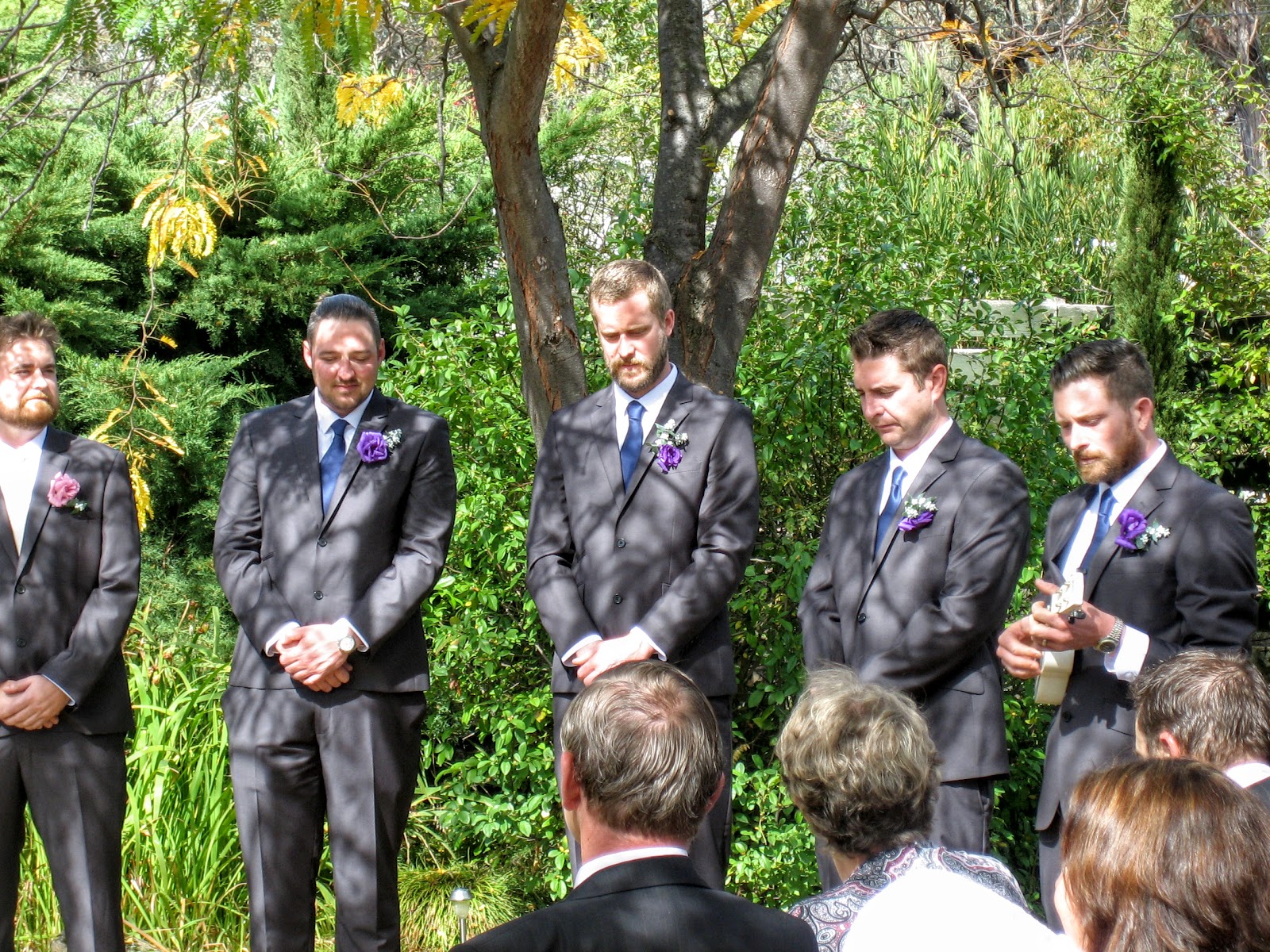 A ukulele performance by a groomsman. 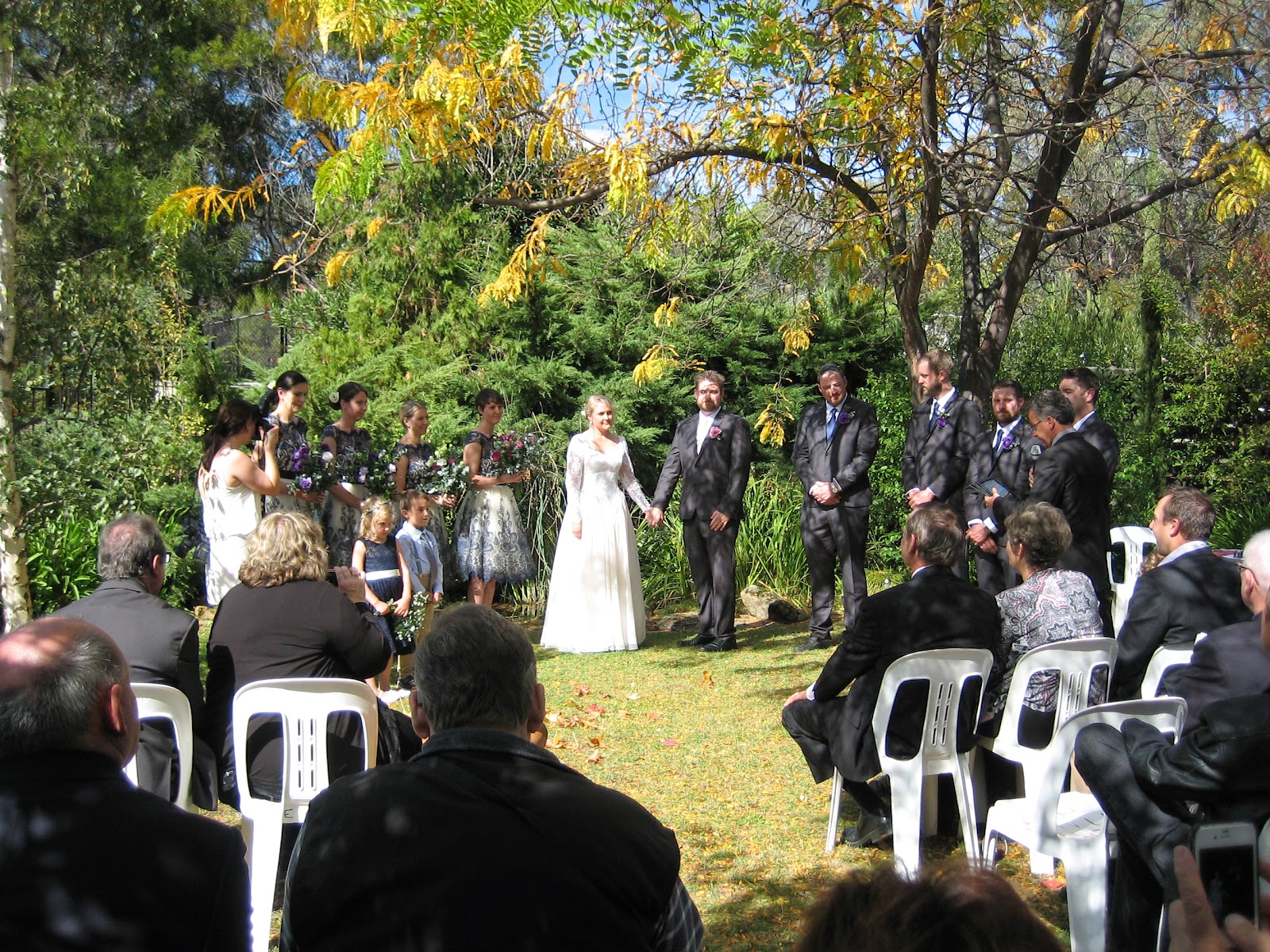 The reception had games, food, wine, and many good people (as well as a good dog). Nick and I entered a game of croquet, simultaneously learning the rules of croquet. It turns out, though, that if you set up the court (is it called a court?) on a hilly area that it can be almost impossible, so we ended up calling a winner after a while of struggling to complete the game.

The rest of the night was spent dancing and meeting new people, and only having to go 100 meters away to our tent to sleep was fantastic. I think camping weddings should catch on, it's fantastic. The next day when we awoke, I was able to actually meet Jacqui and Troy properly, and we chatted over some breakfast sausages and coffee. They offered to drive us back to the backpackers in the town, and advised us strongly against hitchhiking back to Melbourne the next day.

Just before we left, I mentioned that we'd been in Australia for almost a month and had yet to see any kangaroos (that weren't on our plate).

They said the field next to the house got them quite often, so we went around the porch for a look. There weren't any at the moment, and we were about to turn around and head out, when a group of probably about 30 of them came into view. Hopping across the field, we saw our first kangaroos!!