The smell of stone dust on sweat permeate the air. Hammer and chisel crash into each other deafeningly within the confined space. The stonemason pulls his head out of the chamber to wipe the sweat from his eyes. He is halfway finished boring a circular hole onto a rough-hewn cylinder of sandstone measuring two meters long and one meter across. Once finished, a team of people will haul the massive stone jar down from the mountainside quarry, across 20 kilometers of jungle and open plain, and up to the top of a promontory where it will join hundreds of other jars. There is will remain, relatively undisturbed for more than two millennia until I come along and poke my head inside. 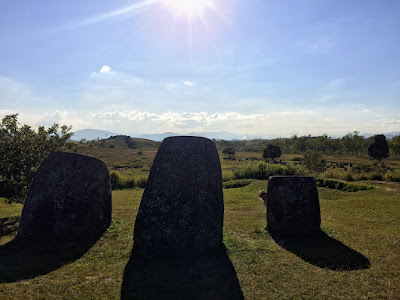 To be fair, I’m probably not the first person in 2,500 years to poke my head inside this particular jar. They have captivated and bewondered visitors and locals alike ever since the purpose of their origin was lost to human knowledge. Madeleine Colani studied the Megaliths of Upper Laos extensively in the 1930s. She theorized that the jars were created by salt traders plying the overland route connecting the Mekong basin with the Gulf of Tonkin. Colani also unearthed human remains in and around the jars pointing to their funerary use, perhaps as a place for the body to be distilled of cremated before burial. 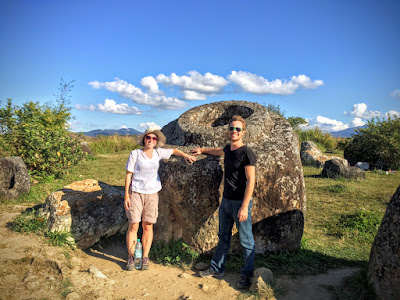 Locals prefer to tell the legend of their use as vessels for brewing and storing whisky. This is comparable to present-day customs of brewing up rice liquor in drums. Water is then poured over the top and the mixture is sipped through a straw. You have a choice to sing a song or take a drink; whoever does not sing must drink!

I just hope they had clear labels to differentiate the two uses.

I’m in The Lao People's Democratic Republic, known as Laos, or ‘Lay-oss’ as JFK would pronounce it whilst describing the incursion of communist forces into the Plain of Jars in 1961. This area of unprecedented megalithic historical significance became a prime battle ground in the Laotian Civil War pitting the Pathet Lao backed by the Vietnam People's Army against the Royal Lao Government backed by the CIA through clandestine operations of Air America and Operation Barrel Roll. 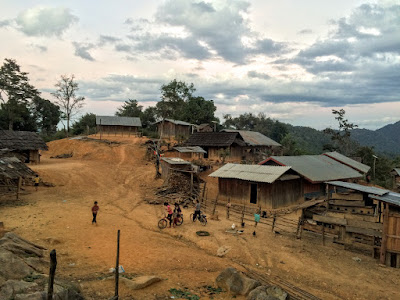 Ban Phakeo village on top of a mountain near Jar Site 52; many Hmong people living in villages like this fled to Minneapolis after working with the CIA during the war

In addition to the ground conflicts that ravaged the Plain of Jars, the US waged a relentless, harrowing, and at times lazy bombing campaign that blanketed the Plain of Jars and southern Laos with two million tons of bombs. Many bombs were dropped on Laos as a ‘secondary target’ to avoid extra landing procedures following the abortion of primary missions to northern Vietnam. Laos now has the distinction of being the most-bombed nation on our pale blue dot. One third of cluster munitions did not explode as intended, leaving millions lying on the ground, ready to go off at the slightest provocation. At first I was skeptical of stories I heard: so many children are killed by accidentally picking up or playing with the cluster bombs. Then I saw for myself: 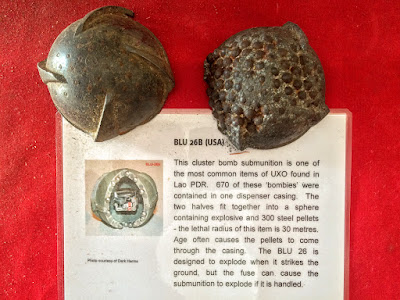 Here is a cluster bomb, showcased in the Mine Advisory Group visitor center in Phonsavanh 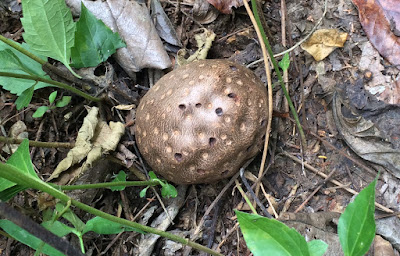 Here is a type of fruit that is readily found on the forest floor. It makes a nice playing ball too

Children and adults will also knowingly pick up bombs, hoping to sell them to scrap metal dealers. A cluster munition could sell for 10,000 kip ($1.23)! Bigger bombs mean bigger money. 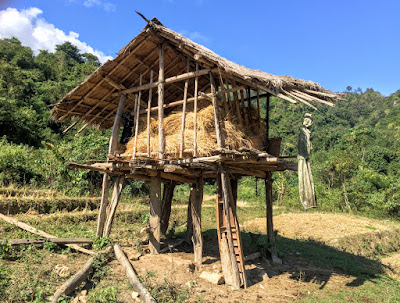 The aftermath of the conflict 45 years ago is apparent across the landscape. Neither homes, nor archaeological sites, nor open fields were spared bombardment. 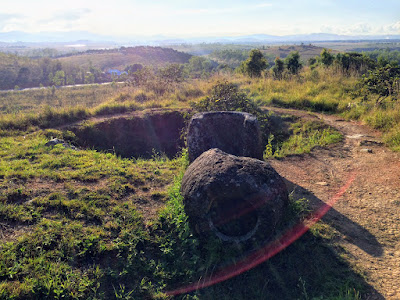 Jars toppled and split in two near a bomb crater

Big bomb crater in the countryside 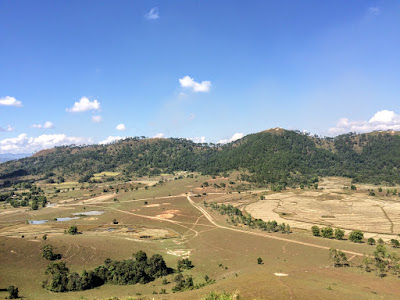 The crater shown above is one of the cluster near the center; additional craters can be seen across the landscape and in the rice paddies on the right

Unexploded ordnance (UXO) clearance in Laos has been excruciatingly slow, with a lack of resources and seemingly insurmountable quantity of work to be done. An estimated 80 million UXO were live in the country by the end of the war and average of 300 people were being killed or maimed each year. Much of this work has been spearheaded through NGOs like the british Mines Advisory Group (MAG) and coordinated by the Lao government.

In recent years things have been looking up. The US government has finally stepped up funding for UXO clearance channeled through the State Department and the human casualties have been dropping. However, the economic impact of UXO persists: Laos remains an achingly poor country and UXO are a major impediment to economic development. Farmers are afraid to expand their fields for risk to life and limb. New construction of basic amenities and infrastructure are impeded by the necessity for precautions and UXO clearance before something as simple as new road construction. 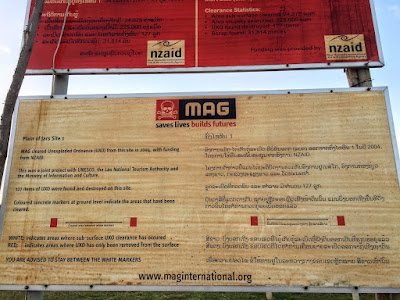 Today, seven out of 90 identified megalithic jar sites have been successfully cleared, allowing them to be opened to the public and stimulating the regional tourism economy. But there is still much work to be done. Only when the Lao people are able to build new schools, hospitals, and rice paddies without fear of their own land will this explosive legacy finally be laid to rest. 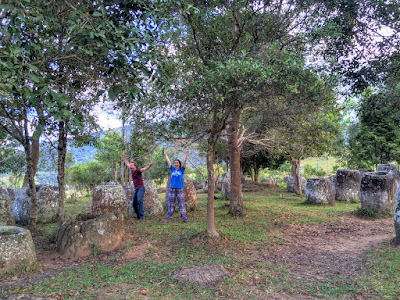 For more information about UXO in Laos I recommend the documentary Bombies, which is available to stream at this link.
MAG shared the Nobel peace prize in 1997 for their work in Laos and around the world and is a 501(c)3 organization in the US and registered charitable company in the UK.
Posted by Nick McBride at 8:58 AM