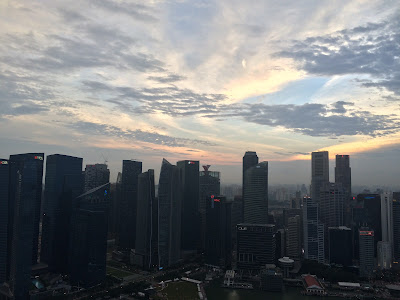 Ah, what to say about Singapore. I don't think we had been there 12 hours before Nick and I began to talk of moving there. By 24 hours in we were seriously considering it. 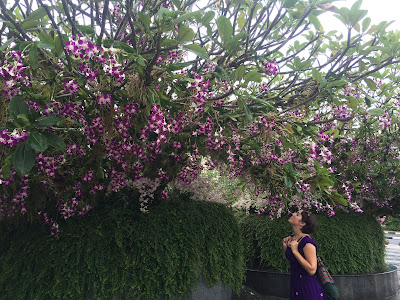 On day 2 we were sitting in the common area of our hostel using the speedy WiFi: Nick on the laptop, me on my phone. "Whatcha looking at?" I asked him after a while of silence. He (slightly sheepishly) turned the laptop toward me, he was researching the tax situation for foreign residents in Singapore. I laughed and showed him my phone, I was looking up rent prices here.

An item of note about Singapore: English is the main language here. There are 4 official languages: English, Malay, Mandarin, and Tamil, but English is the most widely spoken and used officially and in schools.

We spent a week there eating, wandering, eating, and drinking our first proper cocktails since Melbourne almost 4 months prior. One might ask why after 60 days in Indonesia, none of which led to a desire to move there, we would leave Singapore after only a week. I wouldn't have known the answer to that question either before the planning for this trip started (drastically improving my world geography skills.)

An item of note about Singapore: it's just a city. It's a country that's just a "little red dot" on almost any map. "Little Red Dot" is a common theme in business names here. **The more you know**

We started our first full day by sleeping in. Normally not a noteworthy accomplishment, but after Indonesia we marveled at our ability to sleep past 4 AM (no roosters!), to sleep past 4:30 AM (the nearby Mosque didn't blare a call to prayer!), and even to sleep past 6:30 AM when everyone in Indonesia has been awake so long that street, TV, and other miscellaneous noises are just everywhere. We checked into our second hostel (an unexpected holiday weekend left us with disconnected bookings, more on the holiday later) and were unexpectedly given an upgrade to pods instead of bunk beds. A fantastic upgrade and an auspicious beginning to our first full day.

An item of note about Singapore: the national pastime is DINING. They take great pride in their food (for very good reason) and bring together so many different cultures and cuisines into vast arrays of delicious dishes.

There are "hawker centres" all around Singapore which are essentially street food, but in a building instead of on the street. Massive collections of different food vendors all in a large building with a roof and tables. 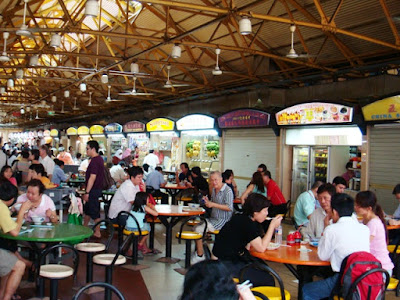 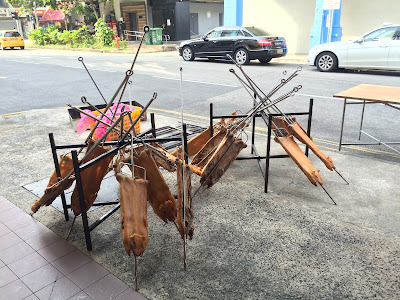 Also sometimes you'll just come across some pigskins next to the sidewalk. Mmm, lunch.

Nick and I went to a few of these hawker centers and consistently got delicious and very cheap food. (The national pastime is dining!! And it's cheap! I'm in love with this country.)

Our search for proper cocktails also brought us happiness and relief. These bars actually have (and know how to use) bitters and aperitifs. We found a gin bar called The White Rabbit which reminded us of our favorite bar back in New York, Gin Palace. We found a Japanese restaurant which served sake and sake cocktails. We found a bar called Bitters and Love which reminded us of our other favorite bar in New York, Amor y Amargo (translated: Love and Bitters). And my personal favorite, we found The Library, a secret bar behind the facade of a whiskey shop with a password to get inside to the bar 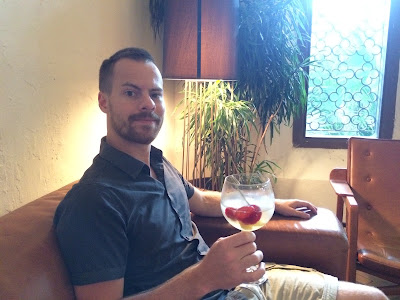 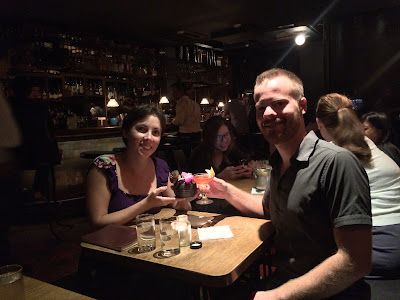 We also went to the top of the most awesome looking building I've ever seen: the Marina Bay Sands hotel. 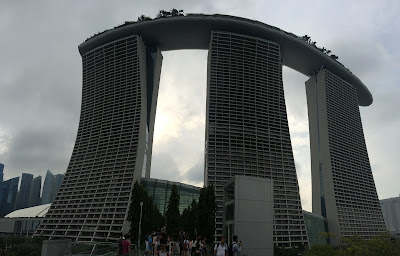 3 towers with a ship stretching across the top 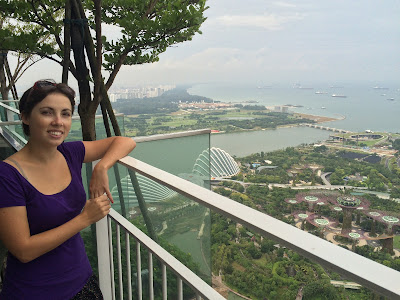 We had a nice view of the "Supertree Grove," a collection of 50 meter tall man-made trees which looked pretty cool in the fading light, and then treated us to a surprise light show after sunset. As we were sitting high above the trees watching the show I was in awe of how lit up and colorful Singapore becomes after dark. This was not a special treat for the holiday weekend (yes, we're almost to the explanation of the surprise holiday), but something that happens every night! The next day we went back and experienced the light show from the ground beneath the trees and it was as amazing as I had hoped. 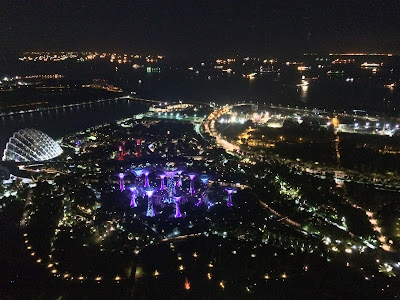 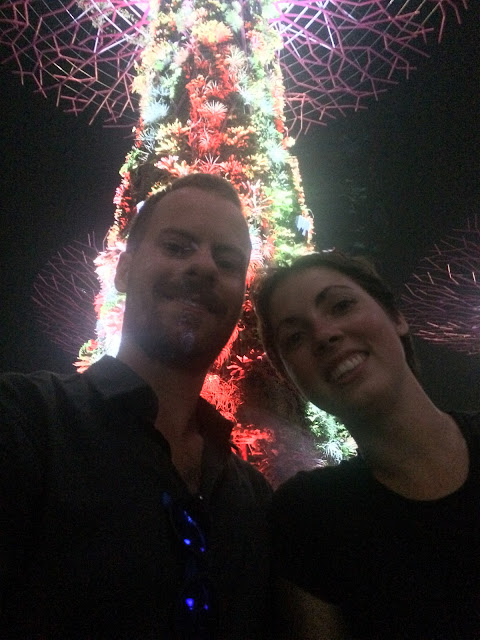 A couple weeks before leaving Singapore a friend of ours from New York who's been living in Hong Kong told us she would be arriving in Singapore on the 8th of August and would we be around then? A quick look at our Indonesian visa expiry and we were shocked to be able to report to her that we would be entering Singapore on the night of the 5th and would definitely be able to see her there! Curious as to what (other than how awesome the country is) was taking her to Singapore then we found out that we'd be arriving, purely by the chance of our visas, just in time for the country's 50th Anniversary! The Independence day, August 9th, made the week we were there a very festive time.

In addition to the amazing coincidence of arriving just at the correct time to Singapore, we were also able to see our first familiar face from back home in 6 months.

Not only that, but Nick got recognized across a crowded restaurant and an old lab mate and we spent an evening with him showing us around. 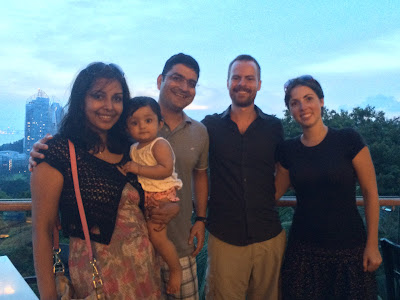 All in all, a great week spent in what may be surpassing New Zealand as my new favorite country. 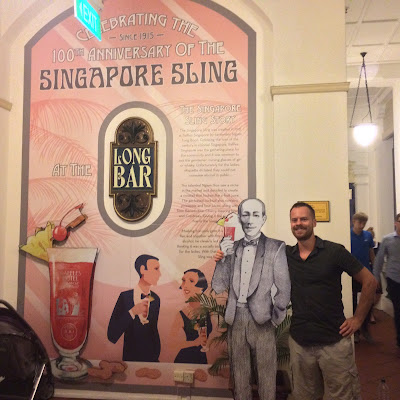 Can't go to Singapore and not try the Singapore Sling! 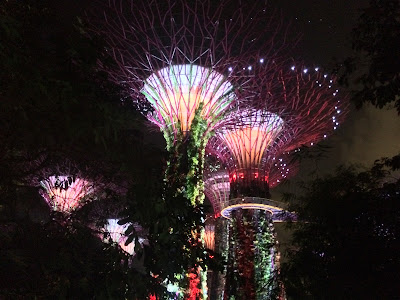 Posted by Elizabeth at 3:55 AM