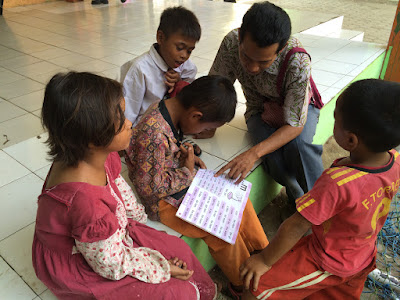 Having made our way across 11 Indonesian islands to the teeming capital city of Jakarta we were ready to visit our next WorldEd project since we covered their financial literacy program in Timor-Leste. We are now very excited to be able to share with you our experience at a school for homeless and underprivileged youth.

In Depok, a town just south of the main capital city, World Education has been funding a school for children unable, for one reason or another, to attend public school. These children are either too poor to have a government ID or legal papers, are orphans, stopped school at a young age and are too old to continue, have a criminal record, or are working and unable to attend full time. The school is called Master, and it provides a necessary environment for the many children who come to register every day. World Education has been involved with the school for the last three years with their ConnectEd project, funded by the Alcatel-Lucent Foundation. 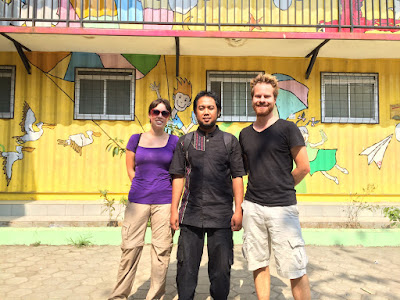 Mustami, the director of YABIM, the Indonesian foundation which runs the school, holds a quiet, benevolent presence, as well as the respect of the school’s many students. Their adoration was clear as he rode in on a motorbike, immediately clung to by six or seven children.

We sat down in the school’s office, a professional looking stack of converted shipping containers, with Mustami. The office has electricity, a computer, an impressive array of binders arranged on shelves, and stays open every day of the week for potential students to register. He spoke passionately about the school, the students, and the future. He filled us in on how the school managed to educate thousands of children over the 14 years it’s been running with an all-volunteer teaching force and wafer-thin budget. 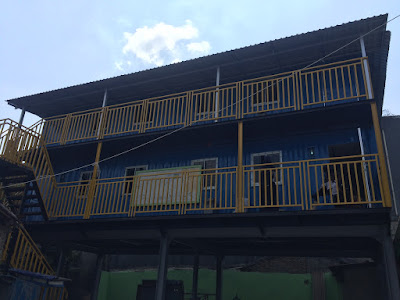 Administrative center of the school

As we were talking in the office, a young woman came in to man the desk. She is a former student and now volunteers in the office. She told us that 10 people had already registered that day. It was only noon. The school is kept on its legs by a large number of volunteers. People from the community and former students come in as instructors and office workers to make sure that Master can continue.

The 10 prospective students who registered that day will be put into a “learning group” for 3-6 months before being enrolled in regular part/full time classes. This time, closely supervised by the learning group’s instructor, will determine their best place within the school. The number of new recruits seems far larger than the school could maintain over time, but Mustami informed us that many children come and go at various stages. Sometimes they have to move away, sometimes they need to try to make money instead of going to school. He brightened noticeably as he pointed out the possibility of them leaving because circumstances have allowed them to enter public schools. Sometimes their family circumstances will improve and public school will be a viable option again. This and graduation are the happiest reasons for students to cease their attendance at Master.

300 current students are living on the premises, the school also allows students’ families to join them in lodging here

As we were leaving the container office, a small boy pelted out of nowhere into Mustami’s arms, chattering away happily in Indonesian. We were told that he is a five year old orphan who was brought here; he lives here at the school, along with any of their students who have nowhere else to go. Approximately 60% of students have families, but often they live very far away. The other 40% are orphans, and Master acts as their family. 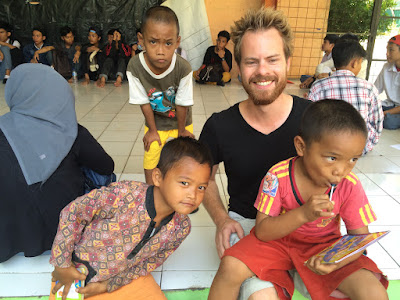 Excited about reading and cameras!

In between showing off his reading skills with Nick and running around with the other children, he would excitedly talk to Mustami, hold his hand, and hug him. In the short time that we interacted with him, he appeared happy, healthy, and able to indulge in the joy of being five years old. 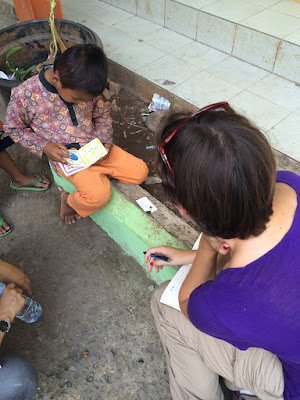 I also sad down for a short time with an adorable six year old named Ikik. He lives close by with his parents and loves coming to school here. I took out a small book and he excitedly showed off his reading ability before proudly informing me that he is learning to write and draw as well. He talked about playing on the playground here and said his favorite thing is playing sports after school with all his friends. At this point I let him go do just that. After very politely shaking my hand, he scampered off toward a little girl holding a ball. 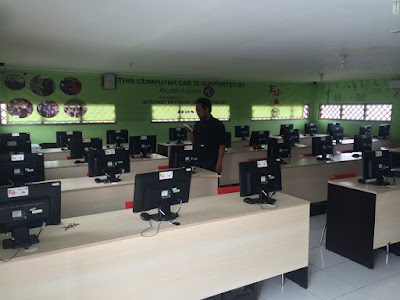 Computers provided by the ConnectEd program

The computer labs, two well stocked labs with 36 computers each, are a point of great pride for Master. Providing all of its students with computer skills training assists greatly in their future job opportunities. The school has also been able to offer vocational training courses in a number of computational areas. One former student who specialized in Digital Media was able to land a job at a highly reputed video production house in Jakarta. 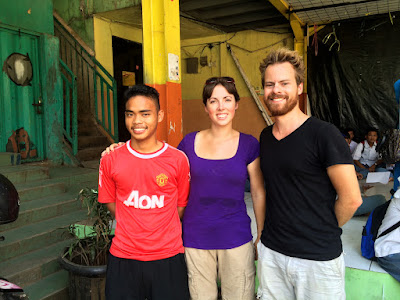 Ucok, an 18 year old current student, attends Master with his 17 year old brother. He has been attending Master for three years, but has had to take time off intermittently in order to work and earn money. A public school would not be able to accommodate his extended absences. Ideally Master would like their students to attend continuously, but when, like Ucok, they need to leave, Master will always welcome them back.

Ucok finds school here much more exciting than he ever did before. He and his brother live here at the school, their family live on a different island. He spoke warmly of the flexibility Master offers, explaining that he has left twice to work for a short while, but always returns to school here. He takes guitar lessons in addition to the base curriculum for his year.

He told me of his desire to continue to University if he can get a scholarship. When I asked what he wants to study there, he glanced shyly at Edy, acting as our translator, and admitted that his goal is to learn English and become a translator. His awe and respect for Edy’s talent were clearly visible and with my questions finished, he took a few minutes to chat alone with Edy about learning English and translating. 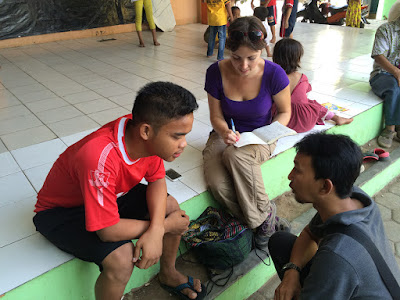 Ucok confiding in Edy his desire to be a translator 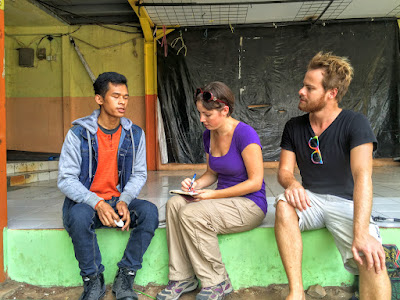 August, 25 years old, is in University now and attended Master for three years. He had stopped school in year six in Central Java. When he moved up to the Jakarta area he was working in a compound when he heard about the opportunity that Master offered. He was 20 years old, too old to continue his education in traditional school, which he had left as a 14 year old, but not too old to be allowed a second chance by Master. His boss brought him to the school for registration and he attended here for three years. After being sponsored for his graduation exam, August earned a scholarship and is now studying social development at University. In addition to his studies and continuing work for the estimable boss who brought him to Master, he comes back to the school once a week as an instructor.

His goal upon graduating with his University degree is to work in Education. He hopes to be able to help more disadvantaged youth like himself, giving them an opportunity as Master did for him. When I asked how he felt about Master, he paused to collect himself. Slowly he answered that Master gave him the spirit to continue his life. The people here became his family and he is so thankful that he found his way here.

The foundation that runs Master also has a health center and advocacy training, working closely with the local community. Appealing to the community by providing these wonderful services, they have gained support and volunteers have come from across Java. People who recognize the good work of the foundation will offer themselves as instructors, office work, or provide what other help they can. People also spread the word around the community, ensuring that when someone has a need, they know that Master can help them.

One of the school’s large expenses is exam fees. In a huge blow to impoverished students, there are exams at the end of grades 6, 9 and 12, each costing 300,000 IDR, (approximately 23 USD at the time of our visit). Some of these children have recently been living under bridges and overpasses, for them $23 is an unimaginably large sum. Without passing these exams, there is no graduation from high school, seriously impacting job prospects and entirely eliminating university prospects. Master has been paying these fees for their students, and many of them have gone on to university with scholarships.

Unfortunately, the ConnectEd project which has been supporting Master was a three year program and had just ended when we arrived in Jakarta, leaving the future funding of the school in question. To make matters worse, impending construction of a shopping mall nearby is threatening to seize part of the school’s land through Indonesia’s version of eminent domain.

Mustami has a contingency plan for every worst-case scenario. “Right now we are taking loans to cover the students’ costs for government exams and graduation certificates.” His conviction evokes a clear impression of how important it is for these children to be able obtain their graduation certificates. We have to help them succeed through that last step of their education, whatever the cost. He has also been searching for and securing some alternate funding sources for repaying those loans in the the long term. While Mustami’s sheer force of will may be able to keep the school going along with a slashed budget, there is certainly a need for more funding to support this wonderful school. The students will continue to be taught to the same standard, but without funding, the school will soon be forced to stop applying their students for graduation exams. It is painful to see such a trial for this school which has already captured our hearts. We sat down with Edy, Country Manager, and Rieni, HR/Office Manager, at the Jakarta World Education office, to discuss the projects, past and ongoing, in which their office has been involved. The conclusion of the project, and with it the funding for Master, was emotionally difficult. This goes to show how limited the resources are when it comes to helping real people on the ground, even when stretching that money to the absolute maximum. They continue to support the Master school by lending expertise and advice, but without additional major donor support current financial resources are all dedicated to other projects.


World Education’s Indonesian office oversees the microfinance and financial literacy project in Timor-Leste, on which we reported previously. In partnership with World Education Australia (Good Return), the office also works with palm oil farmers in Borneo, the West Kalimantan province of Indonesia. This project is similar to that in Timor-Leste. In addition to the financial literacy component a Farmer Field School has also been established for extensive training on sustainable agricultural practices and farm operations.

Another major project that World Education is carrying out in Indonesia is to work with the the government school system to improve school administration and teaching practices throughout the country. This is part of a major initiative of USAID called PRIORITAS where World Education is instrumental in providing training to school administration officials and teachers.

Our trip in Jakarta was enjoyable for multiple reasons, but meeting Edy, Rieni, Mustami, and the students is top on the list. Witnessing in person the Master school may even be top of all our 60 days in Indonesia. 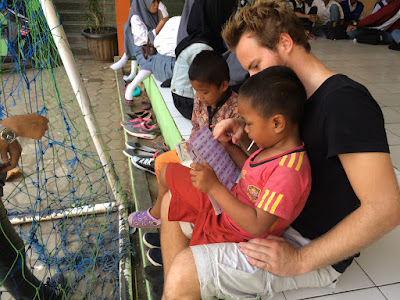 This kid reads Indonesian so much better than Nick!