The Lembata to Sumatra Lambada pt. 2

...So we arrive in SUMBA! Mysterious land steeped in ancient animist tradition; where the annual arrival of the Nyale sea worm heralds the traditional bloodletting joust called Pasola that will christen the earth with human blood for an auspicious harvest; where massive, megalithic tombstones weighing hundred of tons are still dug out of the earth to cap elaborate graves; where each funeral necessitates the sacrifice of many buffalo and the building of a new home necessitates the sacrifice of many pigs; where the only comment in traveling within the island on Wikitravel is 'Independent travel to and within Sumba has its challenges.' Getting around isn't really that difficult even with only a smattering of Indonesian language. In the end, as with so many things, it's only a matter of pricing.

To kick things off, our ferry actually arrived early! A 10 pm arrival instead of 2 am meant that we were not quite as screwed in trying to find a hotel that would take us in.

And the ferry itself went much more smoothly than the last one. Logistically, not literally, it was a pretty choppy, but very enjoyable ride. We split up upon entering the ship, I went in search of actual bunks while Nick scoped out the potential for claiming a spot on deck. I found 2 bunks in the dingy under-deck economy class room just as Nick texted me that he'd found a good spot on deck. Unfortunately the padded mats were not removable from these bunks as they had been in the last ship, so I couldn't bring any to his spot. Deciding that fresh air was worth not having any padding, I started up the stairs to Nick's staked claim. In the stairwell were 2 mats, un-monitored and therefore un-claimed. I seized them and struggled my way clumsily up the stairs and out onto the deck with my 25 lb. backpack and 2 sleeping mats. We passed a decidedly comfortable day being fed a constant supply of fresh sea air. Also: no "Pelni Mob." 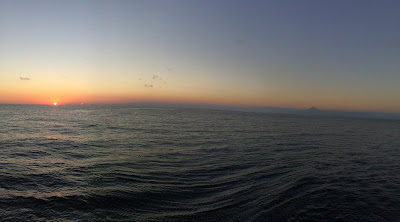 Sunset from the boat.

There are so many good things to say about Sumba: it's beautiful, the people are friendly, they have waterfalls, traditional villages, and delicious food.

We had the best fried chicken of my life. Straight out of the street wok and onto your plate! 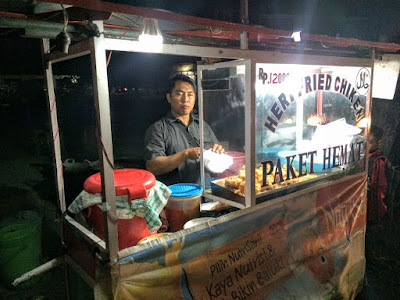 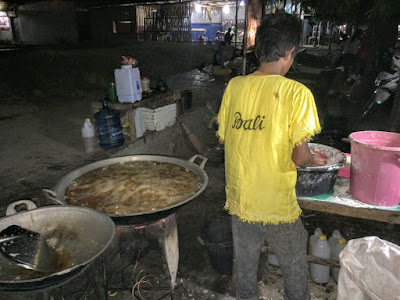 
It was so good! It almost made me a vegetarian just because I don't think I will ever have chicken that delicious again in my life.

We headed for the arid western half of the, where the landscape looks like it might be from the American west in contrast to the fertile jungles of other Indonesian islands. There we rented a motorbike, and just roamed the lands, soaking in the sights of massive megalithic tombs and getting to know the locals in the traditional villages. They were very welcoming and quick to offer us coffee and lots of areca nut (betel nut) as we attempted to communicate and share our life stories across the multifarious language gap. 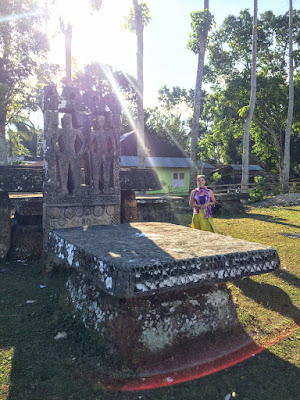 150 buffalo were sacrificed during this chief's funeral 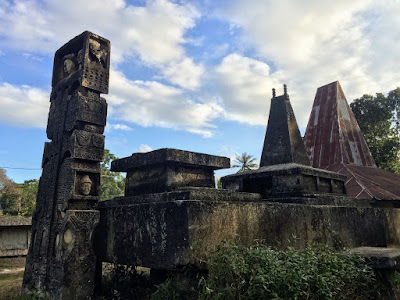 One of the biggest tombstones in Sumba 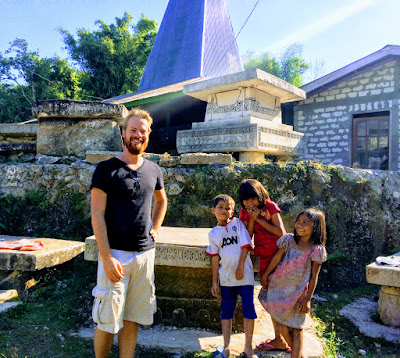 Of course the local kids were overjoyed for a paparazzi session

At one village we witnessed the beginning of a marriage negotiation. The groom's party arrived with two horses, three buffalo, and a pig. This wasn't the bride price mind you, this is just the ante, the gift to get a seat at the negotiation table for how many animals would follow each month for the following year. The prospective groom seemed to have the advantage for negotiation since they bride had 'already been spending too much time with in his village.' First things first though, upon arrival of the groom, animals, and all manner of extended family and villagers, there commenced a serious volume of betel nut offering and chewing. I tried one bit and it was heinously bitter, though not quite as nauseating as I feared. The quicklime that they spike it with to keep the active ingredient in its freebase form made me salivate like Narcissus when he learned about Facebook.

I declined to try. 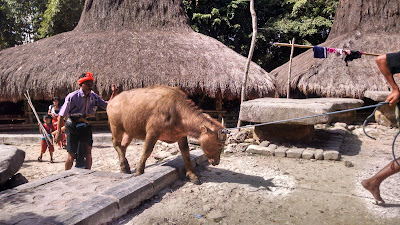 One of the buffalo, no doubt destined for marital bliss.


We met a lovely woman there who offered to take us to her home for some food. We accepted and she promptly had her sister catch and cook us a chicken. Upon hearing our plans to go to a waterfall the next day she gave us some grave advice. "If you go hiking in the jungle with a guide nobody will bother you because he can always translate/explain what you are doing. But if you go hiking in the jungle alone it is dangerous because people will be afraid that you're here to kidnap someone."

Slightly skeptical of how much prevalence there is in Sumba of random white people trekking through their jungle to kidnap people, and confident in our benign appearance, Nick and I soldiered out to the waterfall next day sans guide. Nobody accosted us except the gatekeeper. Despite the fact that we'd been driving on an overgrown gravel road with nobody in sight for an hour, there was a gate and ticket booth to get into the waterfall. It was definitely worth it: 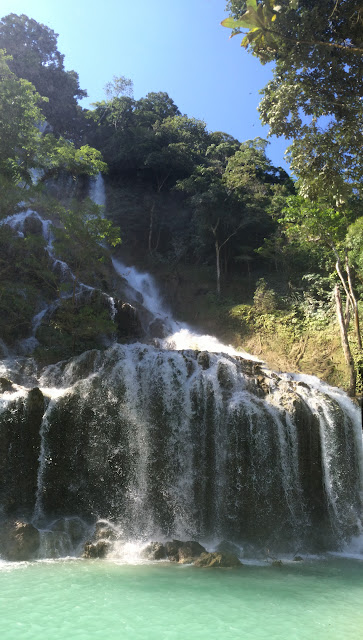 This post and the following tranquil float are dedicated to my dear friend Steven 'Goober' Marshall, who passed away this week following a tragic hiking accident. Goober was one of the first people I met when I arrived at WPI for freshman orientation. He welcomed me into the new and uncertain realm of college social life with his characteristic broad, warm smile (no to mention his perennial sandals and shorts) that would continue to enliven many a moment in the years to come. 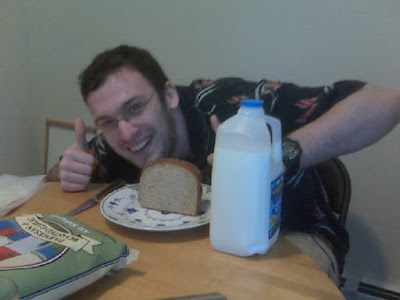 Goober survived on only white bread, milk, and ketchup (not pictured)

He held an unequivocal exuberance for life and his passing makes it keen that we should all find the a similar joy in every moment, even without him here to remind us of it. And as a river, every moment presents a facet of joy to ponder as it passes. And we to the sea.