The Lembata to Sumatra Lambada pt. 1

The time is bloody well nigh to put metaphorical pen to paper about how it is this sojourning duo has made it across the vastness of Indonesia from the last time I checked in at Lamalera, Lembata.

Dual post time!! E (shockingly) in purple and Nick in black because he's a psychopath who doesn't have a favorite color.

My favorite colour is the clarity of contrast.

After fishing and feasting upon Mamma Maria’s fantastic comestibles in Lamalera we bused it back to Lewoleba, a journey that includes stops to hack off any uppity tree branches that had gotten ambitious enough to impinge on the road since the last time the bus had been through. Lewoleba was a welcoming little town where the locals were quick to pull the paparazzi card on us and ask for a photo. The kids would then inexplicably flip off the camera during these photo sessions. Adults too! Grown men would ask to pose with us and flip off the camera. 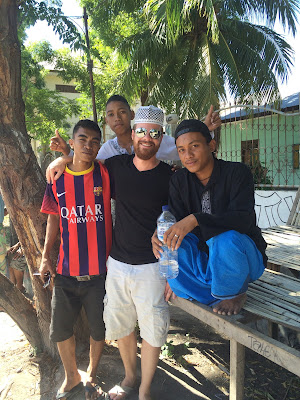 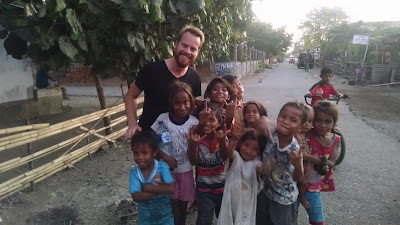 Not in an unfriendly way of course, just with a big smile and middle finger raised to the heavens. This is something that seemed very particular to the local Lewoleba youth and if anyone has an explanation for this birding penchant I would love to be enlightened.

Across the bay smolders the sulfurous peak of Ile Ape (literally Fire Mountain). So naturally, we had to climb it. 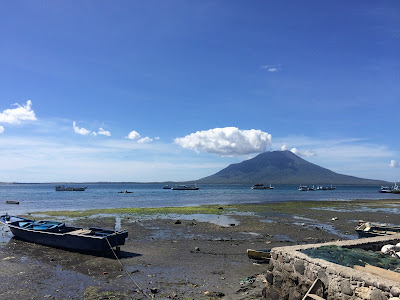 Scene: a fluorescent-lit office redolent with muzak. Buttoned-up interviewer: "So what are your hobbies outside of work?" The gruff reply: "Whalin', climbin' volcanoes."

Ile Ape was a great, physically grueling climb. Four hours up and three hours down, it was the most intensive trekking that we've done on this 5 month trip by far. 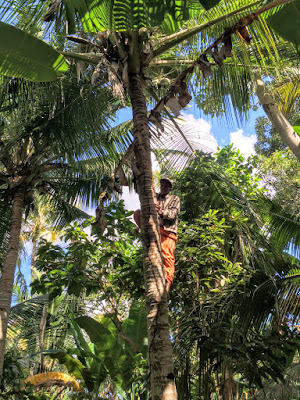 Stopping for a coconut refreshment


Our next task would be to catch a speedboat to run the chute between the islands of Solor and Adonara to Flores. This endeavor was somewhat dubious given the harbinger that had greeted our Pelni ship when we first pulled into Lewoleba one week ago: 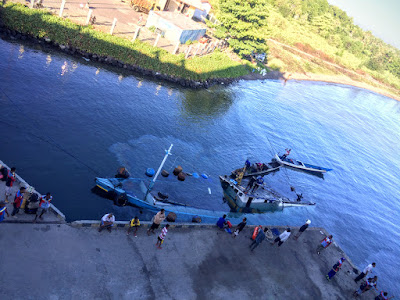 Unflinching, despite a day's delay for food poisoning (I suspect those fish eyes from the boat, or some of the other sailor's fare they gave me during the whaling voyage), we boarded. We were soon hurtling through the surf as one woman let out a shrill scream every time our small craft smashed into the next wave, three massive outboard motors roaring in top gear at the rear. 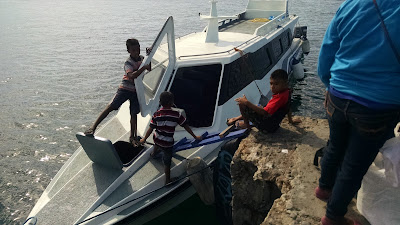 Young porters in action before departure

As is the penchant upon debarkation of any vessel in Indonesia, we were immediately set upon by drivers offering us "ojeks" (a paid ride on the back of a motorbike), taxis, and buses. Often they won't even wait until we've gotten off whatever boat we're on before attempting to secure our business. Drivers ignoring the masses of locals debarking will crowd around us in an unrelenting plea for us to follow them to one vehicle or another. I don't know how much they overcharge us on average for the same service, but given how desperately they try to gain our attention while ignoring dozens of others, I imagine it's not insignificant.

In this case we were looking for a bus, and—given the description above—it's not surprising that we were on one within a few minutes of stepping foot on land.

A funny thing about buses here, with the exception of Java island, is that they actually will pick people up and drop them off at oddly out of the way locations. When getting on a bus we can tell them the name of a hotel and they will drop us off at the door. This is not a perk of being overcharged or "special," they do this for everyone. Which means that it's not uncommon to be very close to where you're going on the public bus, only to have it turn down an absurdly narrow side road for 10 minutes to drop a passenger at home. Turning around will then take a further 10 minutes before the bus is back on track again. We've even been picked up at a hotel that was accessible just to pedestrian/motorbike by someone coming inside to get us and lead us to the bus.

It adds a lot of time, but overall I like it. It's no worse than going to a bus station and having the bus drive around for an hour trying to fill all the seats before leaving town. The latter method often seems less productive and you have to listen to someone leaning out the door yelling the destination name to every pedestrian that looks slightly inclined to travel. 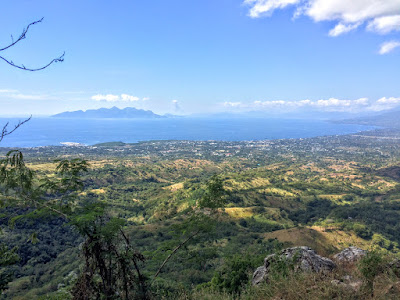 Maumere, the largest city of Flores

On our way to Maumere on the bus, Nick and I picked at semi-random a hotel to stay at. Wikitravel has been an invaluable source for things like this, and we picked from the "budget" category one of the hotels that didn't have a bedbug alert on it. (Knock on wood, we haven't had bedbugs yet, all of our myriad bites have been from mosquitoes, spiders, and ants). 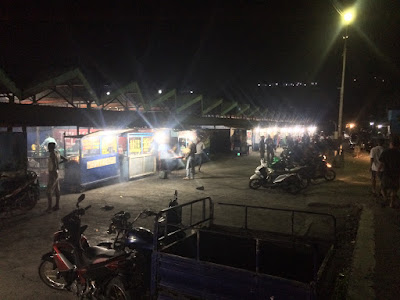 After being ceremoniously dropped at the front door of the hotel, we began the request for a room from the woman at reception. Although in cases such as these we rarely use much English, she was overwhelmed and called for her son to come translate. Hilarity ensues, her (adult) son is one of our fellow guests at the last hotel on Lembata island. His name is Troy, and he promptly tells us that his mother likes the look of us and wants to give us a discount, making this our cheapest room yet at IDR 100,000, ~$7.75/night.

That night we ran into him and ate some dinner at a small street cart across the road from the hotel. As I picked up my fork to dig into my fried rice he stopped me. "There is a tradition we have here in Indonesia before you can eat." I was intrigued, and laid my fork down expectantly. He handed his phone to a friend and posed between us for a photo. I should have guessed: I can't even begin to think how many Facebook pages we must have appeared on in our 60 days here. 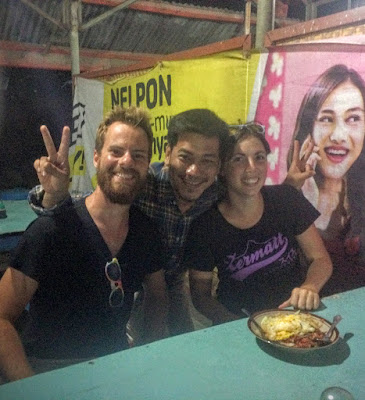 We also met Febrian, who offered to show us around and out of town as well as help broker rental deals with motorbike owners possessing varying degrees of sanity. 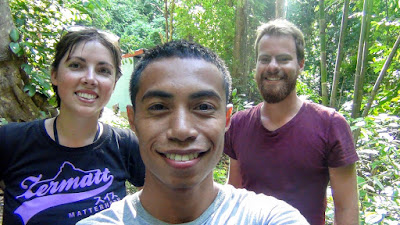 Trekking to the elusive Maumere hot springs with Febrian

Next stop: Moni and the inimitable tri-coloured lakes of Kelimutu. Local mythology has it that the souls of the dead come to rest in one of the three lakes at the summit of Kelimutu. Which lake the ethereal bouncer lets you into will be in accordance with your virtues and vices through life. The lakes also change colour periodically according to the varying concentrations of minerals as they leech into the water from the crater sides.

On the topic of various colours, Kelimutu is also one of the major tourist attractions of Indonesia. 'I haven't seen so many white people in months!' I exclaimed as three other foreign travelers walked into our guest house. They, having just come from tourist-saturated Bali instead of our route from the east, just gave me a queer look. 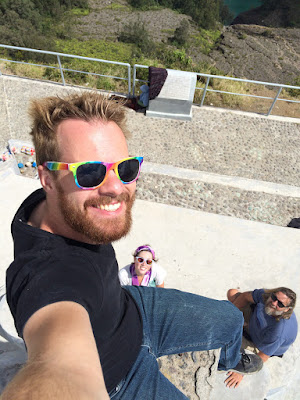 Ohai! I found a british traveler!

We rented a motorbike in Moni and paid the highest price that we've paid anywhere in the country. I think it's probably because it wasn't so much that there were motorbikes to rent, as that our hotel owner knew a guy who probably wouldn't be using his motorbike the next day and we could have it. Without an established rental system in the town there wasn't any competition to drive the price down. Also I think that anyone else claiming to know about motorbike rentals was probably talking about the same one dude's bike. There weren't even 2 helmets available with the rental and we had to borrow an extra helmet from the hotel. 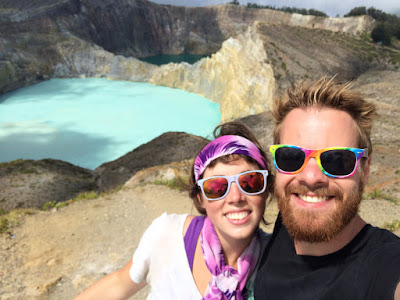 Two of the lakes..

They said I couldn't get all three in one photo, ha!

After Moni we made a beeline for Sumba, an island known for keeping a very traditional lifestyle. We arrived in Ende, the harbor town, 1 day before the ferry was to depart for Sumba. It was perfect timing because there was no way we wanted to spend any more time in Ende. I have 1 good thing to say about Ende: we ate a really delicious chocolate filled pancake from a streetcart. Yup, that's about it.

The hotels were all full of the "economy" level rooms (although I'm actually quite skeptical that this was true and sometimes wonder if it's just a ploy to get us to pay for an upgrade from our obviously bottomless Western bank accounts) and we ended up paying the highest price that we've had in the country (~$15.50). We asked to order some food from the menu sitting on the counter and they said they had no food until morning. We asked for a towel for the room and they said they had no towels. 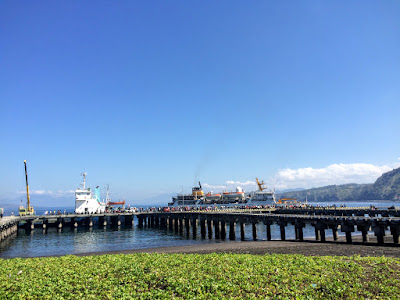 The best thing Ende has to offer: a way out

I think every single motorbike in that town had a backfiring problem. You couldn't walk for 2 minutes down the street without some bike or other driving past with a loud explosion. On top of this the kids playing on the beach had a particular love of firecrackers that we haven't seen elsewhere in the country. In combination it leaves us with a very definite perception of Ende as a town full of very loud popping noises and not much else.

The Pelni ferry office had computer troubles and we sat in the waiting area for an hour. I went up to the counter to see if the problem was anywhere near fixing and the guy was sitting there reading a magazine. "Problem" he told me with a shrug. I asked if we should come back later when it was fixed and he seemed to think that a capital idea. We went to get some food and when we returned the office was closed for the day. Hoping upon hope that they would be open before 9am the next morning when we were supposed to board, we left. 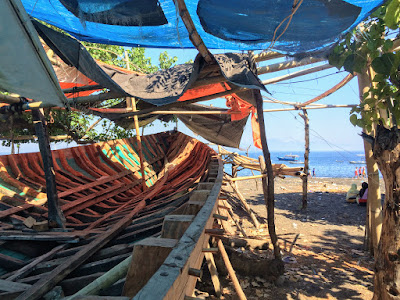 Buildin' a new boat in case the ferry doesn't come.

A nice surprise was waiting for us, however. As we were reluctantly checking into our expensive hotel, who should greet us but Troy, our Lembata and Maumere friend! And we did end up making it onto the ferry, so all was well.

Set ourselves up with a sweet spot on deck. Things are looking up!
Posted by Nick McBride at 8:39 AM