Our time here has been spent almost exclusively staying with friends of Nick's. His grad school in Cambridge, summer camps growing up, and studying abroad in Japan have provided us with a steady stream of accommodation and even an impromptu wedding invitation! There is a very large disparity in the number of friends with babies in Australia. Nearly all his friends here have kids, compared to hardly any of our friends back home. I have been in heaven, staying in houses with small children and ignoring Nick's incredulous looks as I slowly sound out simple words and make funny faces. I can only imagine what he was thinking the morning I had a 10 month old on my shoulders walking around the house making various "boop" noises with every step. The little girl was laughing though, so that's what matters. As I write this, my scribbling is punctuated by a 3 year old who approaches me every few minutes to show me what he's drawn. I compliment him on a "big bus" he's made. A few minutes later he returns, proudly gesturing at another drawing. Also a "big bus." I no longer need to ask, but he loudly declares each time anyway, and yet again I tell him what a great "big bus" that is, or remind him that buses usually have windows, which he diligently adds.

But this is in Adelaide and my woefully empty notebook reminds me that I'm ahead of myself. Side note: I don't want to entirely blame G.R.R. Martin for my neglect of my journal, but the Song of Ice and Fire (colloquially known as the Game of Thrones) books are amazing and I invariably pick up my kindle instead of a pen. 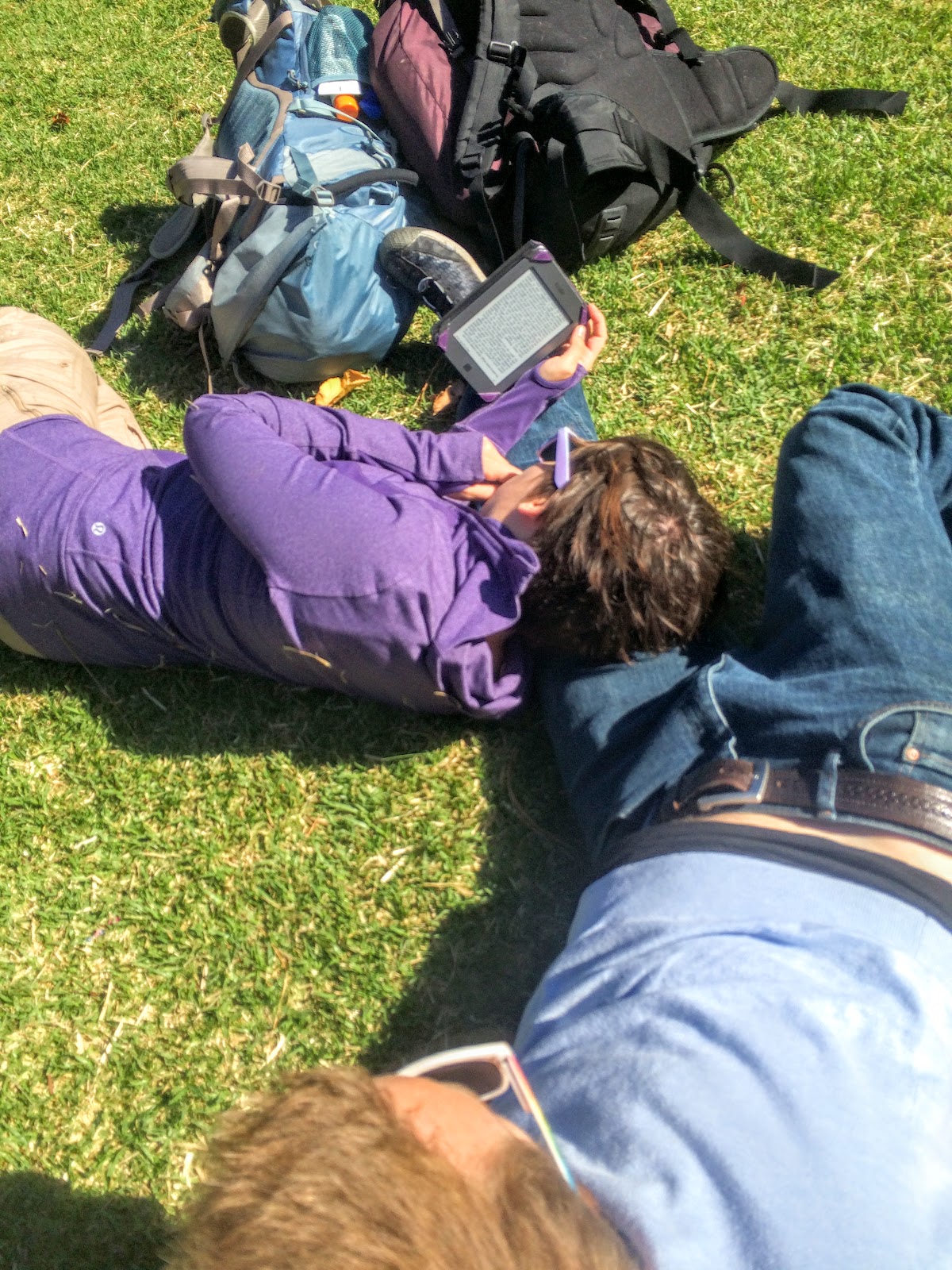 To combat this neglect of our readers, I present: 4 cities in 4 days!
I will update here every day for 4 days with a blog about the 4 cities we've been to so far. Brisbane, Sydney, Melbourne, Adelaide.

Without further ado: Brisbane (and the Sunshine Coast)

We were only in Brisbane city for a couple days, and I was still feeling a but shell shocked from leaving New Zealand. I don't think anyone can leave New Zealand without feeling...regret isn't the right word, but...feeling like something has gone wrong in the vast scheme of things. What sort of scheme involves leaving such a paradise? Sigh-worthy though our departure was, however, I came to appreciate Australia while we were in Brisbane. Nothing killed me there, so already we were ahead of expectations. The public barbecues, parks, the (free!) museum there, the new styles of wine to try, there was much to like about this new country. Public barbecue! (To cook kangaroo on!) 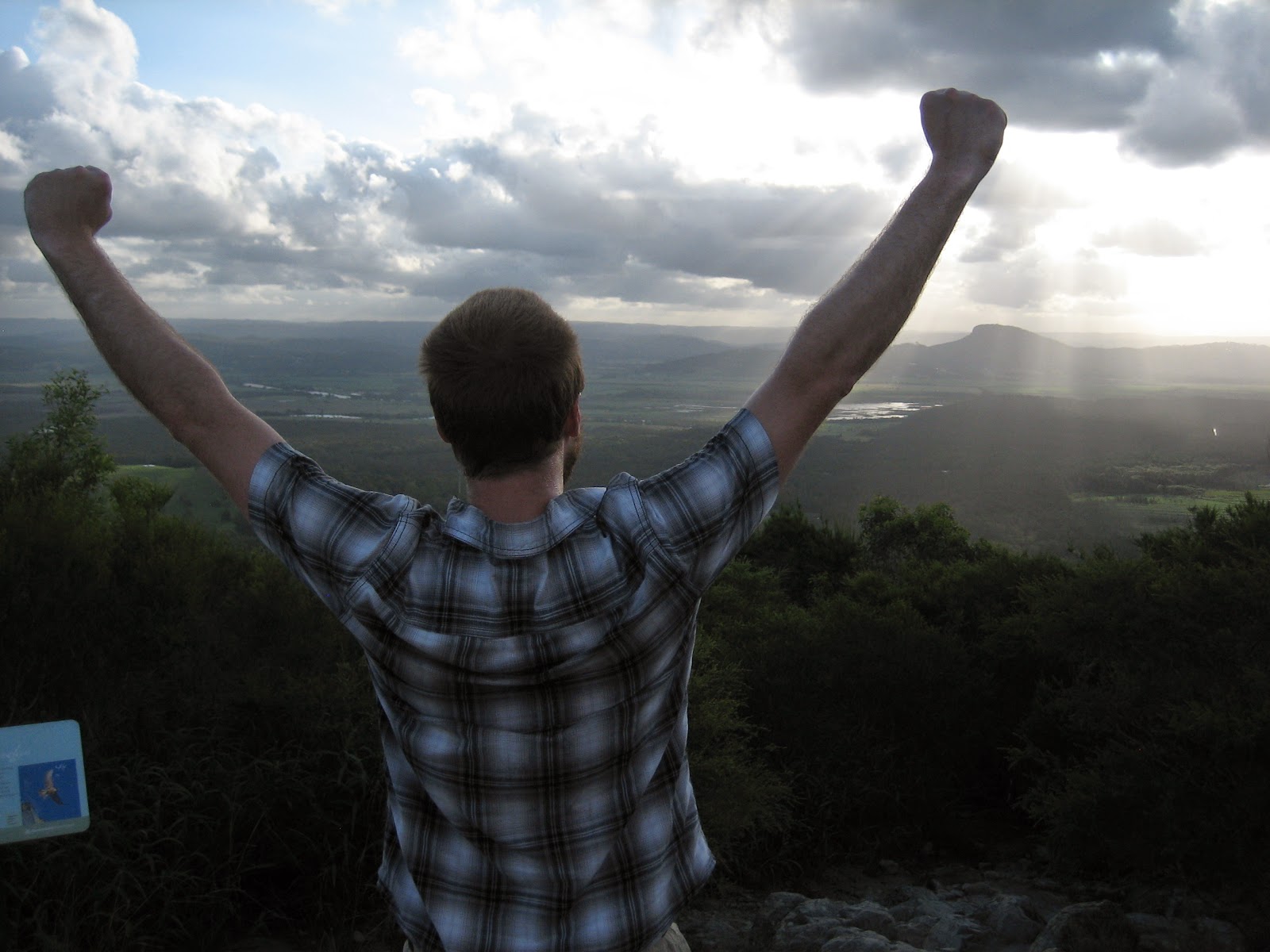 An old friend (hadn't seen him in 12 years) of Nick's picked us up from Brisbane and took us to the Sunshine Coast. He and his fiance are the proud parents of the 10 month old I enjoyed making laugh. Owen took us to the beach and after being assured (multiple times) that the Sunshine Coast doesn't have shark attacks, I agreed to go in the water. After a few days with them we got to see another old friend of Nick's, Elischa, (likewise 12 years since seeing her). She is the proud mother of a 5 year old and the adorably 5 month old below.

Staying with Elischa we saw even more old friends and met new ones, even one visiting who gave us a place to stay in Sydney! Elischa's parents greeted Nick and invited us to come to their farm for a bit. Time on the farm was otherworldly. Living in New York City only 2 months before made the farm a place of wonder for me. Days didn't pass normally. Before I knew it the 3 days we intended to stay were gone. It felt like we had been there weeks and at the same time felt like I had only just arrived and taken one deep, relaxing breath. Easter was coming up in a few days, but Nick and I would definitely be gone by then. 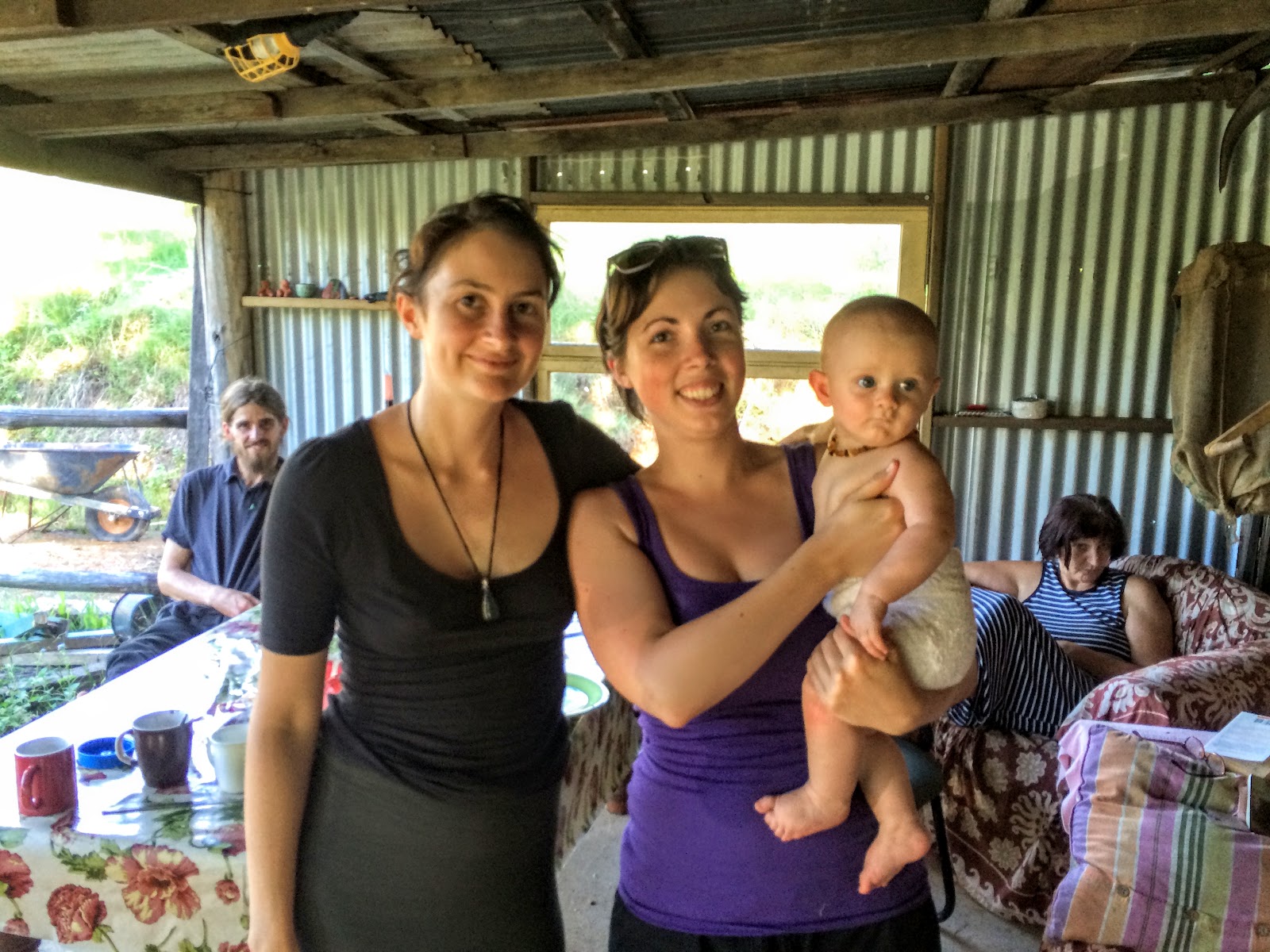 A picture of me at the farm on Easter, with Elischa and her beautiful baby boy.

Nick and I helped build a shelf in the new shed there, moved a water tank that was up on a hill into position, and made some dinners with tomatoes, lettuce, and basil straight from the garden. I felt more in tune with everything there than I have in a while. They had horses there, and an electric fence which I discovered in the best possible way. 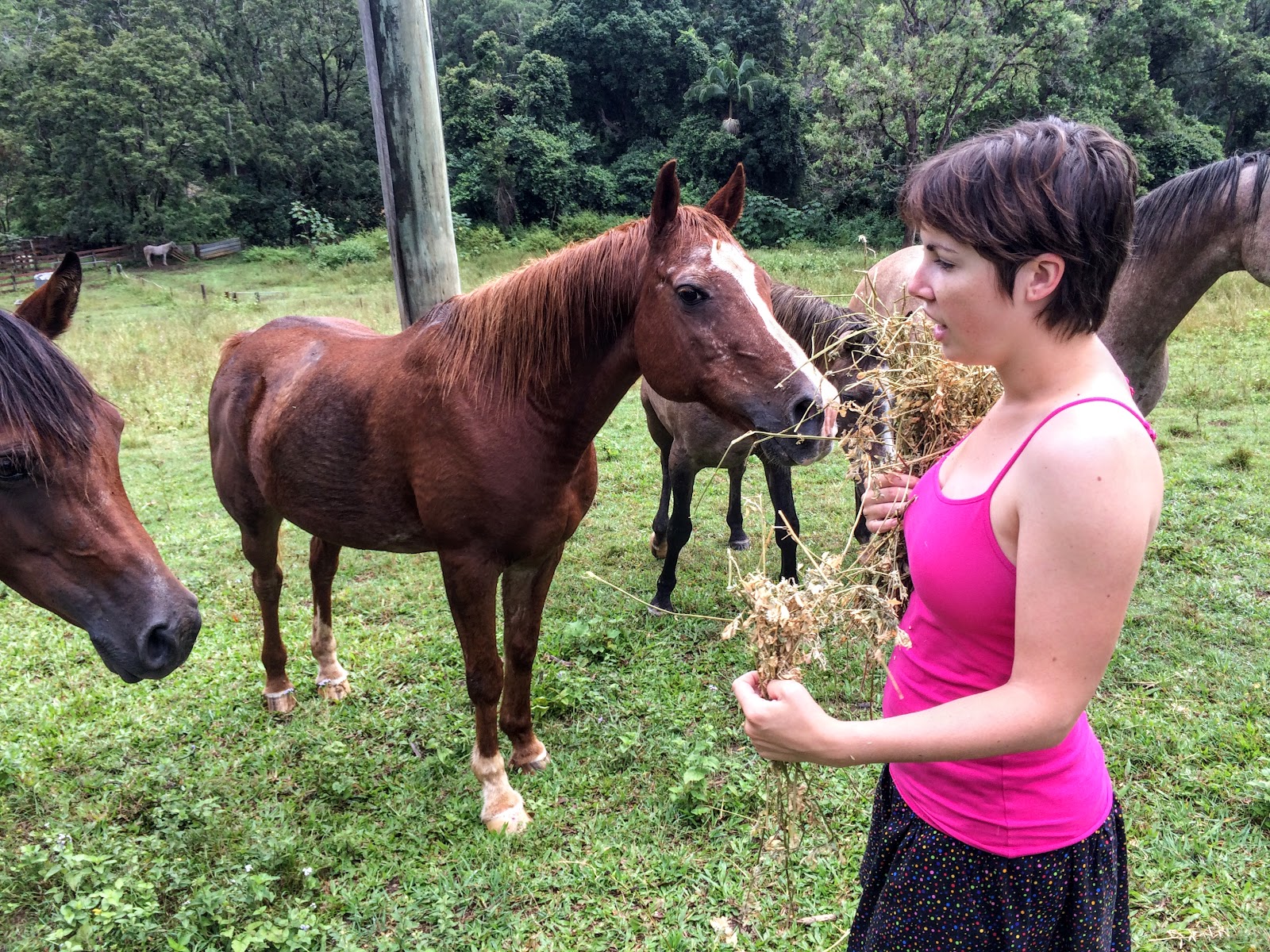 We did leave eventually, after spending a week there. The fords flooded and we had great fun watching the cars go through. We went for a walk in the woods and each got a few leeches. I am slightly ashamed of how freaked out I was by seeing them on my legs. Only slightly ashamed, though...they are leeches after all. I was pleased that I remembered that salt or fire would get them off, and then immediately displeased because we had neither on our hike with us. From now on I will be carrying a small salt shaker with us when we hike. (I didn't even know they could live on forest floors!!) 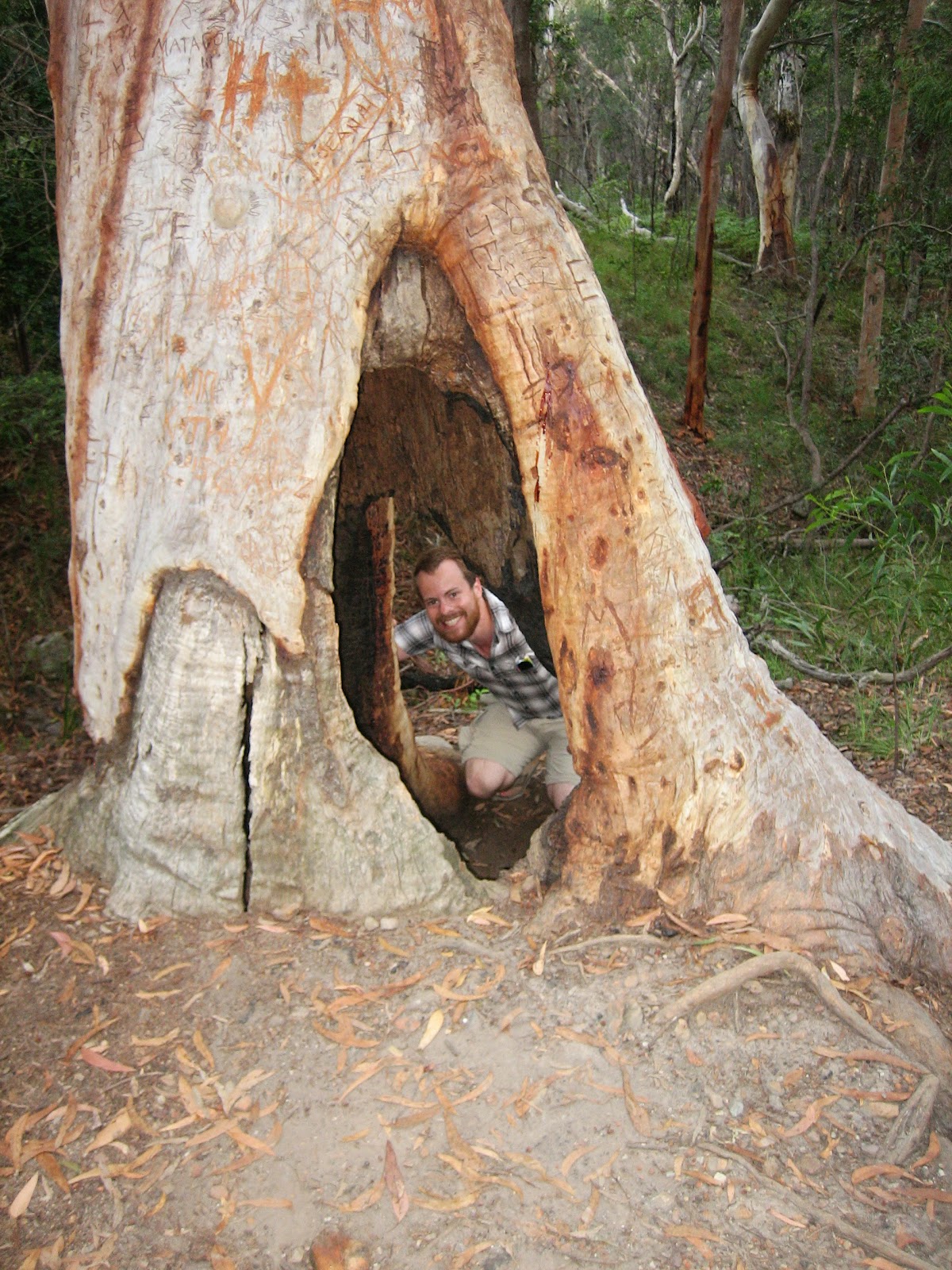 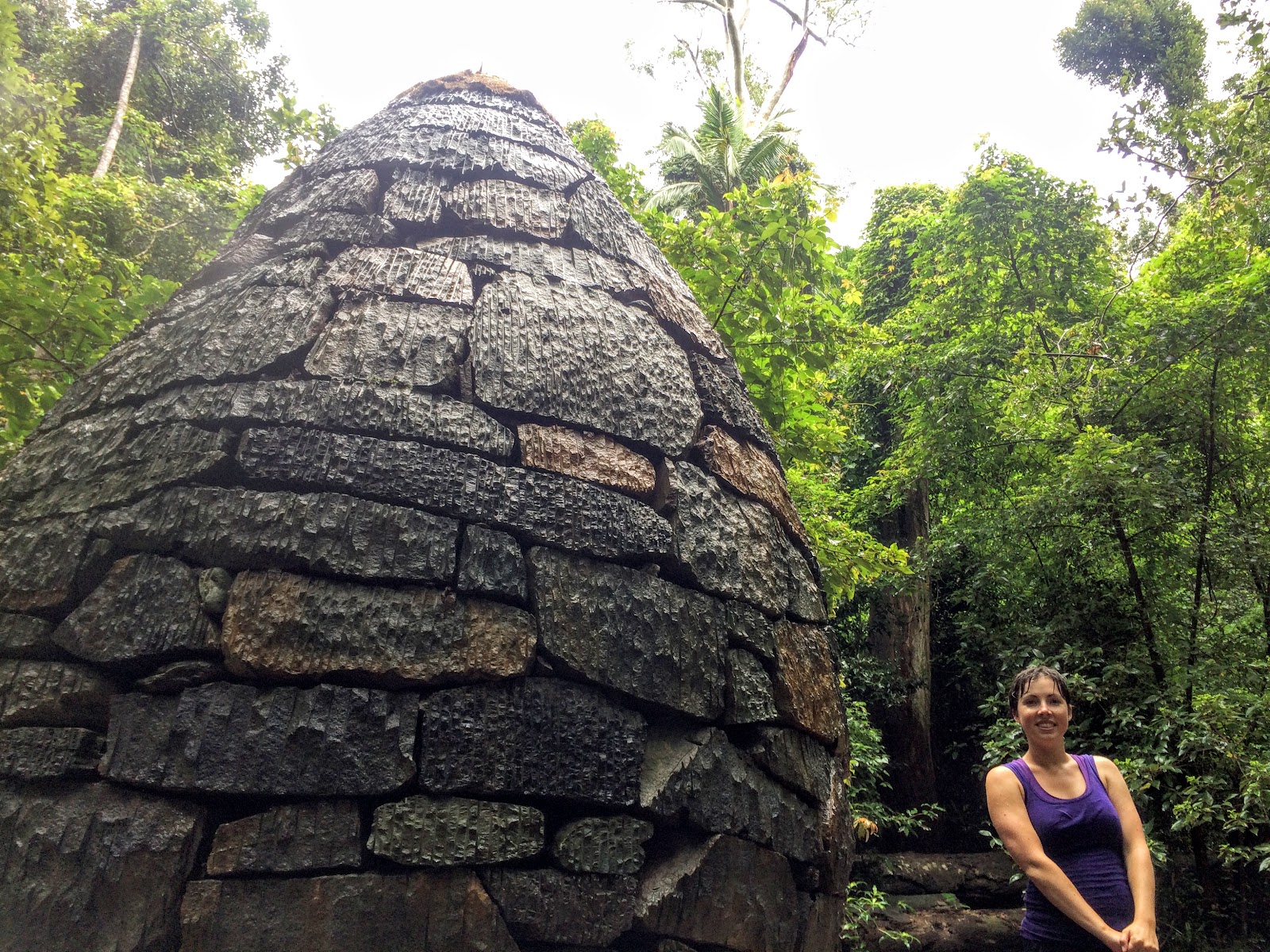 Hiking: post leeches. "Quick take the picture, quick so we can get out of here!"

Stay tuned for tomorrow's episode, in which Nick wakes up for a sunrise run and Elizabeth breaks a laptop.